Every now and again I publish a post that is designed as nothing more of a diary entry for myself and this is one of those occasions.  However I want you to remember that even despite the results I will disclose on this page I am still not a pro blogger as I have chosen for a variety of reasons not to monetize my blog at this time.

So why do it? Well mostly because I enjoy writing however one of the other reasons I started this site was to learn about the web and digital marketing and the best way to do this is by learning on the job and boy have I done that! This site has provided me with some amazing skills and learning curves and I am very happy. I would also like to state that this site is like a laboratory for myself and I have learned so much from it, I have performed split tests, in bound and outbound marketing tests, content test and SEO and keyword tests and Im still performing them.

The story of our site can be easily stated in numbers and according to our stats since April 2012 we have had 162,000 page views. Well the exact number is 161,956 but I think you can forgive me for rounding up.

Some Months Are Better Than Others

One thing that I have learned is that some months are better than others, indeed I have noticed huge increases and drops in traffic and often that has little to do with me but it can be due to a penalty from Google or a post being shared at the right time that gets shared across social media. However its nice that despite these ups and downs I have still grown very nicely over the years.

One thing I have sought to develop is my sites traffic, that was always my single focus. I actually took the decision early on that I would rather concentrate on getting rankings and traffic from google instead of traffic from facebook and that has always remained my key strategy. I only recenlty added to my site a link  a facebook page for that very reason. Any idiot can get 10,000 likes for a facebook page either by sharing popular stuff or actually paying facebook, however when doing an online course I quickly discovered that Facebook are only allowing between 6% and 15% of   your feed hitting the target audience, errrr why would I pay for that?

Instead I took the sensible decision in my view to concentrate on Search Marketing and Search Engine Optimisation/ SEO. It has paid off but trust me when I say this there is loads more work I can do to make the SEO even better but as I do this in my spare time so I have my limits.

However engagement is key and attracting new customers and also retain a regular audience is important. 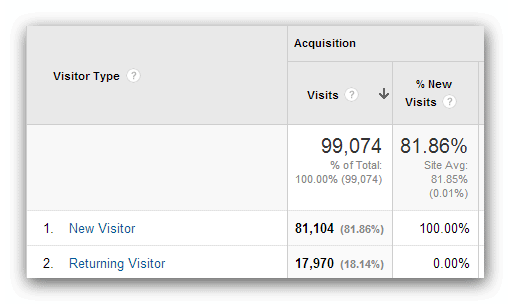 An example from one time period of my site (this is a random analytic view) shows that 18% of my traffic is returning visits, yes a cool 17,970 visits yet a massive 81,104 are new visitors! If Im honest this snap shot was of a recent time period but I forgot to add the exact dates but it is from Google Analytic s. A side note is that I never used Google analytics’s from the start of my web days but I highly recommend it as you can gain key data from it on your sites traffic.

Needless to say that if my growth will continue I can see the site reaching 500,000 visits within the next 3 years. The facts are simple, the site is growing and growing quickly!

Right now there is a mini war going on between traditional marketing and media and search media and its a war that traditional media is going to find it hard to win. In this world the person with web knowledge is going to reign supreme and can generally earn an amazing living.

Now Im not stupid, my blog is  areal baby compared to others out there but its growing and is doing so all the time. We are on Target for a great month again and to be honest the only thing that is stopping me from getting more traffic/ visits is my personal time, this all has to fit in with my life.

So what tips can I offer others trying to get more traffic? Well simply create great content that people want to share. I have literally a few thousand shares on social media for my sites articles and that makes me grin from ear to ear because someone thought it was worth sharing with their contacts.

My other tip is engagement. I could write a book about this but my sites growth has a lot to do with engagement, not from facebook or twitter but from a wide variety of sources that Im not going to tell you about as that’s the real secret.

Now as my site is growing it has allowed me to get bigger names to get involved and I hope this will continue and I can create even better content for the audience.

Once again thanks so much for stopping by and reading our articles. Thanks for the interviews from the martial artists that have helped us so much and also thanks to those who have written for us over the years.