KARATE FOR SELF DEFENCE 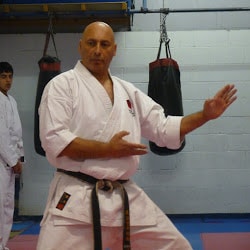 Karate for Self Defence is a vast subject of which I hope to go back to again and again. Today’s article deals with some aspects of that vast subject and is entitled ‘Karma, Some People Just Dont get it’. It is written by Top coach in the British Combat Association John Johnston. Just check out the below the quote by Geoff Thompson about John and then check out the article.

The article is a gritty account of self protection that occurred some years ago, and re tells a story of violence and violence prevention.The incident he talks about occurred some 35 years ago and numerous lessons can be learned from this article. And John himself admits some mistakes in his dealings, I believe this is essential reading for those involved in the sharp of end of protecting people/ self protection.

“John Johnston is one of the few remaining giants of traditional karate.
He is a powerhouse. All of my formative training in martial arts was under the auspice of this great teacher. I owe him the world. If you can get to train with him, you won’t regret it. I highly recommend him.”

“KARMA: Some People Just Don’t Get It”

It’s a typical Friday night in Coventry. Friday is lad’s night out and I’m working. I’m a bouncer at a large city nightclub. The club is very busy and the mood is good. I’m in the DJ box chatting to the DJ who is an old mate of mine. The DJ box overlooks the dance floor and is enclosed at the back with a waist high wall, the punters have access between the back of the DJ box and the bar so it is a good place to keep an eye on things only at the moment I’m chatting and not looking. I’m standing with my back to the low wall watching the dance floor talent, ‘as you do’!
All of a sudden my sixth sense kicks in, you know it’s that moment when you know that something is not right or is about to happen. Sure enough as I turn around I spot a guy holding a girl with his left hand around her throat. The girl looks terrified and no wonder because he is lifting a pint pot glass in his right hand.  It seems fairly obvious that he is just about to hit her with it.
I will say this about myself in those days I could react in a flash. I just managed to reach across the wall and grab the guys shoulder and give him a sharp yank. As he was in mid swing about to crack the glass over the poor girls head, my sharp action saved the young lady from possible serious injury. Lucky girl. Unlucky me because as I pulled him backwards, he swung around and hit me with the pint pot just above my left eye opening up a large gash.
Because of the low wall I was able to over balance the twat and pull him into a bear hug and flip him over the wall. This stopped him using the glass again and gave me a breathing space. I had blood in my eye as well as being a bit stunned. I knew that I only had to keep him neutralised for a short while before help arrived.
Sure enough within moments a couple of the other lads were there and quickly had hold of him and he was on his way out. At moments like this there are a lot of different things occurring. Girls are screaming and panicking or being nosey; boys are excited and want to get involved. Emotions are running high especially with any of the parties involved.
As for me, many things were going on in my head. There’s blood in my eyes and I can’t see properly. Adrenalin’s on full revs. People are making stupid comments and asking daft questions. Someone has enough sense to try to get me to go to the toilet to get my eye cleaned up. All I want is to get to the bastard before he’s thrown out so that I can punish him for what he intended and what he did. It wasn’t going to be a happy end for him, but he was lucky, by the time that I had gotten to the front doors he was gone. I had no choice but to let them clean my wound.
After washing the blood away I was able to see clearly and the gash was bad but not serious. However I was told to go to A & E for stitches.
A lift was arranged and I presented myself at Hospital. As usual late on Friday night or in my case early Saturday morning, A & E  was very busy, so before I registered at the triage I thought I would get some fresh air and calm down.
Whilst standing to the side of the main doors in a dark corner, a sort of beach buggy pulled up with three blokes inside. At first I thought nothing of the buggies arrival until the engine was switched off. I could then hear the conversation clearly. I stayed concealed where I was and listened. The guys in the car were arguing about whether to go into the Hospital to find me or wait till I came out. It seemed like they wanted to try and put things right with me so as not to have to face any later repercussions. Myself and my co workers on the door had quite a reputation and these guys were afraid that retribution would be coming their way.
Concealed where I was and listening in on their chatter, the guy that had just glassed me whilst attempting to glass a girl (who I later found out was an ex girlfriend who he had been stalking) thought that he would be able to get away with an apology – “WRONG”
the three lads got out of the car, I stepped out of the darkness and made it clear that an apology was not on the cards, they chose to be prudent and backed off. That left the glass wielding bully to face me alone. He immediately started pleading with me that it was all a mistake and he didn’t want any trouble. I wasn’t listening or talking. The end result was that and altercation took place, needless to say I came off far better.

I’m not proud of what happened; it just was what it was. Do I think what happened to him was justified? YES. Could I have done things differently? YES

Sometimes in life you are forced to make instant decisions. Choices can be limited but may have a bearing on the rest of yours and others lives.

This happened some 35 years ago. I was very fortunate on many counts. In doing my job I saved a young lady from serious injury. I was lucky I didn’t lose my sight, although I still have a scar above my eye. I was lucky.

John is a 7th Dan Shotokan Karate Instructor with the BCKA and the WCA. He was Geoff Thompson’s KarateInstructor and has been teaching and training for 42 years now..Competed Nationally and Internationally in Kata and Kumite. He has been involved in security work and door work for a number of years.
John wrote the story to illustrate how foolish some people can be, how it is a thin line between making a life changing action and you can never predict the outcome of those actions, which applies too both parties in this case.