The Fighting Style of Jack Reacher

In 2012 a film was released based on the fantastic book written by Lee Child. That film was titled Jack Reacher and starred legendary actor Tom Cruise.

The story is one of the best that Lee Child has written and introduces us to the character named Jack Reacher. The character is an elusive man who can disappear off the grid and defend not only his life but do so in style. Cruise plays Reacher perfectly and the Reacher blend of brains and intelligent and technical fighting skill is seen throughout the film

The fighting system used in the Jack Reacher film may seem familiar because its been featured before in a few different films however you may recognise it in films such as Mission Impossible 3 and of course Batman Begins, The Dark Night and the Dark Knight Rises.

However who is the man behind such intensive fighting scenes? Well of course each film has a dedicated and highly skilled fighting team made up of experts in their own right. Yet one name has constantly been called upon to train the best Hollywood actors such as Tom Cruise and Liam Neeson. That man is Andy Norman. 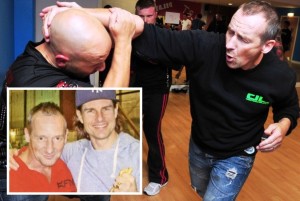 Andy Norman is no stranger to martial artists across the web as he was the co founder of the keysi fighting method. Over 14 years he created a successful martial arts style and business that grew into a global brand with Keysi /KFM. However over the past 12 months he has created a new brand of self defence and that is called Defence Lab.

Andy devised the fighting techniques used by the stunt men in the Jack Reacher film and they translate beautifully into functional self defence techniques. The result is action sequences that not only look real but could easily work in real life.

Defence Lab is a functional self defence training system that looks amazing both in the gym and on the big screen.

You can check out the techniques of Defence Lab in the video clips below or for more information on how to train in Defence Lab go to https://www.defencelab.com/