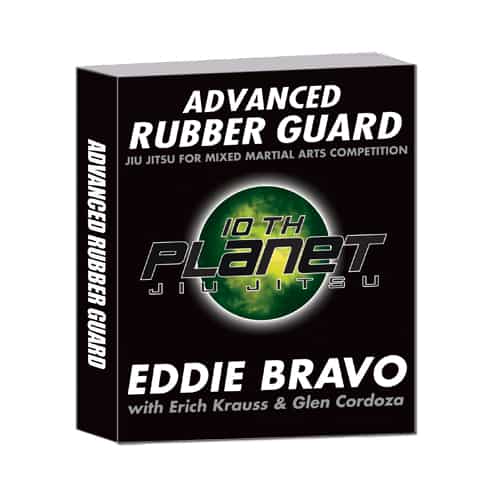 Advanced Rubber Guard By Eddie Bravo is actually the 4th book by Eddie Bravo that I own. Many years ago I purchased his Jiu Jitsu Unleashed followed by his other books Mastering The Rubber Guard and Mastering the Twister.  The latter 2 published by Victory Belt Publishing.

I’m quite a big fan of Eddie Bravo but not for the reasons you might think. Eddie is someone who doesn’t conform, whilst he does have a traditional background he has gone out to try and create something totally new with his 10th Planet Jiu Jitsu systems and I really respect that. However lets get to the review.

I purchased the book via Amazon for £25 and it was a bit of a gamble. Although I have used the Rubber Guard before in training its not something I specialise in but I do happen to really like Eddies Half Guard  and his butterfly guard so when I found out the book had those aspects covered I decided to have a rather expensive ‘punt’ and I don’t regret the decision.

As with all Victory Belt books this is a real beefy product. 362 pages with 2,000 step by step full colour and glossy photos you can see why it costs so much. But it is a product you will have on your shelf forever.

A quick look inside will reveal that this really is an advanced book. Not for beginners and it s a little overwhelming at first. However stick with it and all makes sense but I do think they could have made 4 smaller books out of this massive Rubber guard encyclopaedia.

The contents break down as follows:

Each section is actually very detailed and each photo has a alternative angle with text, not just a  few words but actually very descriptive narratives to explain just what’s going on. The only complaint I have is that this actually cuts down on photo size, so the images are smaller than in his previous books. It doesn’t cause major issues but its obviously a compromise they made.

One of the nice touches are section maps that lay down the options you have from each position, I’ve not seen that before and really liked it. Its like looking at the system from above. Now also I will say that Eddie goes to great lengths to explain micro technique details. An example of this can be seen on page 89 with the Omopalata. There is actually 3 photos just explaining the grip he uses. Superb stuff

Eddie has numerous innovations of his system on display here and the Prison Guard is one such example which he states is great for those with less flexibility.

I could go on and on with this review but ultimately I feel that this is a great book however it is an Advanced guide, often mind boggling in its sheer size. Its a quality text with loads of writing and loads of photos and I feel at its price you have a bargain.

So I recommend this book if you are a fan of grappling, into BJJ or No Gi grappling. I also think its great for those training in MMA as well. Yes its expensive but you will have this book for life. Its not something you can read at one sitting, you will have to pick certain sections and add things to your game and try them out at training. The good thing is that this book is so detailed that when you hit a problem in training you will likely have an answer  within the pages.

I give the book 5 starts out of 5! Its a quality text with great photos and it will last you forever. It is an advanced look at Eddies System and if you to his methods Id suggest  are new Id suggest you look at his other titles first.

Eddie Bravos Advanced Rubber Guard is very impressive. You will learn a lot and considering the price of the book when compared with its content it is still fantastic value.