Crimes from the Past- Herman Mudgett

Crimes from the Past

This article was originally featured in a past newsletter so I thought it would be nice to re visit it again. It briefly talks about an old murder case that is quite shocking. 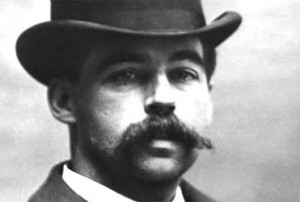 This is the case of Herman Mudgett who was hanged in 1896. Herman was considered a conman and created a Murder castle in his home and workplace. Born in New Hampshire in 1860 he attended medical school however practised only briefly before taking on a career as a conman using magic potions and cures for alcoholism to make money. In 1887 he somehow managed to run a pharmacy in Chicago and ended up owning it and the building it was in, later buying a large premises it was in and turning that premises into his own private torture castle. The ground floor was shops and the top floor was Mudgetts office and private apartments, in between were a maze of 100 windowless rooms, chambers, secret doors and chutes to the mortuary he had constructed deep in the basement. He had constructed this all while presiding over mainly immigrant workforce.

He opened the castle as a hotel and later lured scores of women to the location offering work or marriage. Over the next 3 years many women would come to the location only to be captured and tortured. Peep holes existed everywhere and also tubes to the rooms where he could pump toxic gas into the rooms and kill the occupants. Sometimes he would take some to a torture chamber where he would commit unspeakable acts of horror.

He was eventual jailed for fraud however whilst in prison his castle burned and police discovered the remains of an estimated 100 victims of murder. The victims were men, women and children. He was hanged but stated that he committed the crimes for “the pleasure of killing my fellow beings”.

This sounds like the stuff of films however it’s a true case. These monsters do exist!!