Defence Lab Review- It is Better than Keysi Fighting Method

I was lucky enough to be invited down for a Defence Lab Seminar being run by Andy Norman recently and I think it would be excellent now to provide a review of that seminar and Defence Lab as a whole. First some background.

Defence Lab emerged a little over 12 months ago from the ashes of the Keysi Fighting Method. For those who may still be a little unsure about what I am talking about here is a little history.

The keysi Fighting Method was a system of self defence and fighting that was created by Andy Norman and a man named Justo Dieguez. It was known for its close range techniques and using a double arm cover over its head which was known as The Pensador. However it really came into the public view when it was used in a number of Hollywood Films most notably the Batman Begins film.

The public exposure gained by the Batman film lead to Keysi Fighting Method or KFM as it was known to become a much sort after martial art programme and its Creators Andy Norman and Justo became much in demand. We also saw the KFM in the Batman sequels and Mission Impossible 3.

However over 12 months ago Andy Norman took the decision to walk away from Keysi and the Keysi Fighting Method Company ceased trading. Many different stories were heard about why the 2 creators parted ways and it isn’t my place to comment on that issue. 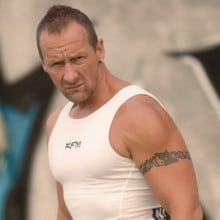 For those that dont know Andy Norman he is a person who has some incredible heritage within the martial arts world.  However he is most notably a Hollywood Fight Consultant. He was the person who actually got the the role of working on the Batman Begins film and not Justo and since then he worked on a range of films and lately we saw Andy train Tom Cruise for the Jack Reacher Movie. Remember the cool fights in that film, well they were as a result of Andy Norman and his Defence Lab system.

Now this latest seminar wasnt the first time I have trained with Andy Norman and I have to say this guy is truly world class. I have trained with Olympic Medallists and I have no issues with recommending Andy as being at Olympic Level in his field. He teaches in a relaxed manner yet is able to get the class motivated with a few words. Adding humour when it is required you know when you are training with Andy Norman that you are with the best!

However this was all about Defence Lab and I was looking forward to getting to grips with it. Now for those that know me I have recently been diagnosed with Exercise induced Asthma of which the instructors were aware of and numerous asked me how it was during the seminar and I had plenty of opportunities to take my medication when required and also sit down and rest. Id like to thank the whole DL team for helping me with that aspect.

I arrived late at the event and was the last there due to traffic on the M6 motorway. So when I walked into the room I was blown away as it was full. Im guessing about 30 people were there if not more all dressed in the new Black and Green colours of Defence Lab and we had a variety of ages and genders.

As I was late I jumped right into it and was able to see that Defence Lab is no Keysi copy! Immediately the whole lay out has changed and boy did I like the new stuff. I’m not going to give away any secrets here but the Defence Lab process is a combination of materials designed to keep you safe against attack and everything we learned was street applicable and useful.

The keysi fighting method grew based on the pensador technique, it was its calling card. Defence Lab however has taken that and evolved it beyond imagination. This has come through research and hard graft by Andy Norman and his team.

The seminar ran at a great pace and it was over before I knew it and we had covered everything from striking, to chokes, to cover work, to defence against biting, gripping and  we even did it in the dark!!

Is Defence Lab better than the Keysi Fighting Method?

Yes. I have no doubts about that in my mind because Ive trained in both (albeit limited) but within the seminar Andy covered some of the Defence Lab innovations and I really thought they were special. It is no secret that I really liked the Keysi Fighting method but there were things that I didnt agree with at its fundamental level. Things that didnt make sense to me based on my experience. I am happy to report that those things are gone and I really loved everything we covered in this seminar.

What Is Defence Lab?

So you may be reading this and asking just exactly what Defence Lab is? Well it is a self defence training programme designed by one of the best martial arts and self defence experts in the world- Andy Norman. He is so good he is a leading consultant to the fight industry and his own team is made up of experts in their own right.

One thing that I will say is that there are no egos in the Defence Lab world. These guys and girls are all about development of themselves and each other. There is none of this ‘our style is better than yours’  or tough guy mentality. This is a really friendly and safe place to train and incredibly welcoming too. It is the perfect match of training and skills.

I had a fantastic night and experience with Defence Lab and Andy Norman. I would also like to thank James Boyle and Paul Strauther and the rest of the team. Their skills and training are world class.

If you want to find out more about Defence Lab then go here : https://www.defencelab.com/ I highly recommend Defence Lab for those looking for a self defence programme and please watch the videos below to see it in action: