This is a  new style of review for this site, where we look at the techniques used in MMA and view them from a self defence aspect.

In the early hours of 3rd Feb 2013 two UFC fighters squared off to test their abilities in the cage. These warriors were the 5 time Brazilian Jiu Jitsu champion and long time UFC fighter Demian Maia and his opponent was the tough as nails Jon Fitch.

This fight was  total domination by Maia as he took down Fitch with ease and spent most of the fight with a ‘back mount’ and tried to sink in a rear naked choke. However Fitch had other ideas and simply fought for 3 rounds to stop the submission. I was very disappointed in so many ways, firstly that it was a really boring fight to watch and secondly because BOTH fighters did very little.

Fitch was taken down by Maia at will and was dominated by one technique  the back mount and a triangle body lock. This was about as exciting as it got. Then the end of the fight came and Maia got the win by judges decision.

But what about the technique? Is the rear naked choke that easy to defend? Of course it isn’t and I would bet that Maia could easily choke me out time and time again. However as MMA is a combat art and one that people look to for self defence techniques/ strategies  (the general world sees the UFC/mma as the ultimate fighting system) we need to examine just what went on in the fight.

The body triangle is a technique favoured by those with long legs. In basic terms it is very hard for a person to get out of this technique and perfect to wear a person down and go for the choke. It restricts both movement and breathing.

Is it good for self defence? Not at all. 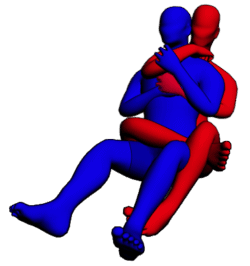 You can see from the diagram  there are several issue that make the body triangle a poor choice for street conflict. The first and main issue here is that the triangle lock actually ‘locks’ you into your opponent, yes they cant go anywhere but neither can you. Being locked into your opponent is a bad situation to be in as we all know in reality there are often other people who will want to get into the fight and you are very vulnerable on the floor. By locking your self onto the opponent you restrict your ability to get up and move.

The other issue is a hidden danger and that is the sheer tension you place on your own knee and foot. With your foot/ ankle bent as in the photo below under the weight of the back of your knee, you place your ankle in a strange position. Its like doing a foot lock on yourself.  Your knee and legs are also bent. This creates a lot of tension on the joints and whilst the position wont cause you pain it really places the joint into a funky position. Under the stress of combat joints can get damaged and you might just need to have them working to run away. 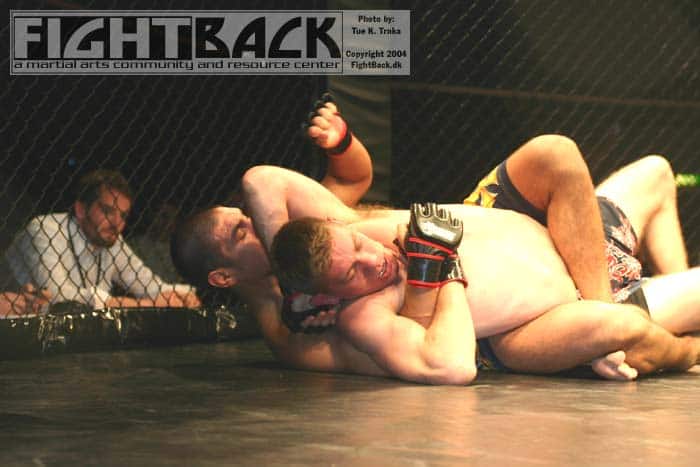 You may be reading this and thinking that you use that position all the time and its great, well I am sure that you warm up and stretch every time you train. All good fighters perform warm ups and so do UFC fighters. In self defence situations you do not have a warm up and your body will be tested with little or no warning. So I personally would avoid doing anything that puts any pressure on your joints. Sure its low risk but do you really need to put your joints at risk?

The rear naked choke is a early learning tool of Brazilian Jiu Jitsu. It is taught because it is a key technique  but let me make this clear the choke is used to put a person into an unconscious state. When you let go, the person usually wakes up. If you hold on to tight or long the person can die! Chokes are a serious business so ask yourself before you apply one, just what is my goal? In self defence situations where your decisions and actions can be scrutinised by a court of law, you need to have your game plan sorted. Personally I never use chokes. they are far too risky and dangerous.

Overall the back triangle body lock and the rear naked choke attack have flaws for self defence and whilst Demian Maia dominated a very talented fighter using the technique, in the modern world of self defence it really has limited uses and you wont find me teaching it.