How To Fight And Win Against Much Larger Attackers 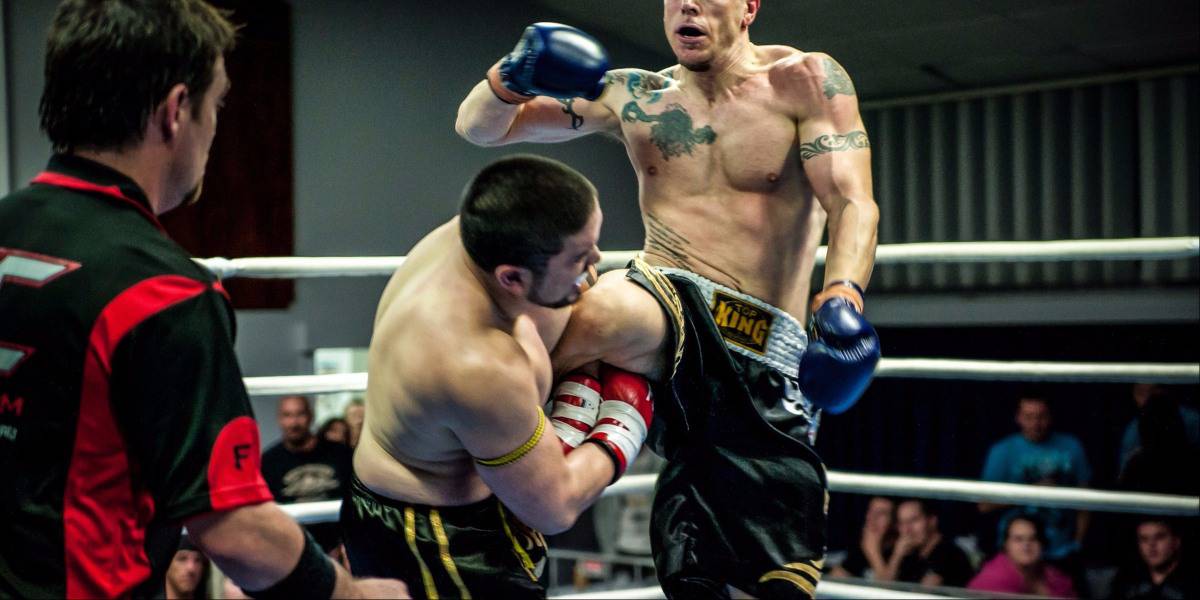 It’s Friday night, and you are in the Kebab house, and the food of the intoxicated Gods is within your grasp.

You can almost taste the Lamb coated in Garlic Mayo as the Kebab Master starts to work his magic.

Then you get a nudge on your shoulder.

Perhaps you even moved a little.

So you turn to see a man, not just any man but a guy so big and scary that you think ‘oh crap, hurry up with my kebab’.

But this man starts to look down at you and for reasons known only to him he has decided to ‘pick on you’.

‘Get the fuck out of my way’  he says in a deep drunken voice.

‘You fucking well will be’ he says!

Have you ever been in a situation like that, where a person who is bigger, scarier and stronger has decided to take all of his life issues out on you?

I have, a few times and in this article, I am going to teach you how to kick the crap out of much bigger people (if they attack you).

Ready? Let’s do this.

Size Does Matter (So Why Ignore It)

A lot of Martial Arts and self-defence instructors believe that size does not matter, well if that were true there would be no need for weight divisions in combat sports like Boxing, Judo and MMA.

The simple truth is that big people require far less skill to kick the crap out of you.

Being big is an advantage, and if you ignore this, you are likely to be destroyed.

But you can’t ignore the fact that one day you might have to deal with a bloody big bloke who could squeeze the life out of you with one hand.

So the first part of learning to deal with big people is the realisation that with almost zero training they could kick the shit out of YOU!

Now we have that out of the way it is time to address the way we are going to deal with this.

The Tactics Of Fighting Much Bigger People

The opponent is bigger, heavier and likely stronger.

The physics are all too easy to see and feel.

The issue is, we have no idea of his skill level.

This brings a challenge to the traditional teaching of self-defence. The old model says hit him, take him down or kick him.

Reality says ‘bigger people tend to absorb punches and kicks far easier, bigger people are not that easy to take down’.

So here you are with the big guy staring at you, possibly he has a big belly too. But this attacker just needs to land one shot, to grab you and heck even sit on you!

You have a tough job ahead.

Now imagine your bigger attacker is more skilled, maybe he is a Brock Lesnar type who has skills, has cardio and has a desire to crush you.

Your big problems just got bigger. Which is why you need to be smart, tactics win fights more often than techniques.

How Do You Eat An Elephant (One Bit At A Time)

Ok so we are not going to actually eat elephants here but you have one big ass maniac in front of you, and you need a plan.

Fortunately, we have the script already.

In the early days of the UFC, we saw Marco Ruas chop down the bigger man Paul Varleans with one tool, a leg kick.

In the even earlier days, we saw Keith Hackney take out the even bigger (now sadly passed away) Emmanuel Yarborough with one huge strike which dropped him, and then he followed up.

We later saw (in some event somewhere) Royce Gracie defeat another Sumo wrestler with a shoulder lock.

What do all these things have in common?

The little guy applied all of their power into landing one technique on one body part.

So there you have it.

Now you can’t fight big guys (or gals) in the street like you can in the cage or ring, the dynamics and pace are totally different.

But the ethics are the same; you break down your attacker by putting all of your power into one area, I call this quartering.

The Art Of Breaking Up A Big Guy

The way I deal with a big person is simple, I draw an imaginary line down the centre of their body and then across.

This way I have 4 quarters to deal with rather than one big person.

Now I know that fighting him one on one is going to be a huge task, but I am pretty sure I can apply my whole body power and overcome one-quarter of his body.

I can hear some ‘aha’ light bulbs clicking on.

So let me explain how I dealt with a bigger attacker once to teach you how this works.

I was in a kebab house ( yes the above was a true story) and a huge power lifter type of guy took an issue with me (I was working as a policeman, and I was on duty getting my kebab (cops have to eat too).

Anyway, this guy took a huge dislike to me and wanted to fight, I was alone, and he was about 6 ft 3 and had muscles on muscles.

The location and the dynamics of the inside of the kebab shop made CS spray, or a baton impossible to use so it was going to be hands on.

After some verbal abuse, I had to go ‘physical’ with this guy.

What I did next was simple.

I looked at the way he was standing and ascertained that he looked to be right handed (this is always a gamble, but his right fist was clenched as if he was about to use it), he was also in a bladed stance with his left side forward denoting that he might have had a little bit of boxing or martial arts training behind him.

In a split second, I had quartered him in my mind, and I was going after that right arm/ shoulder, that was my danger area.

When you grab or trap the strong side of the attacker you in essence ‘kill’ his ability to fight, sure he could use his other arm etc. but it is not likely he will know what is about to happen and being ‘different’ is a tactic in itself.

When I moved next, I decided to push with great force his left shoulder.

Because I wanted his right side and he was in a bladed/ boxers stance, so I needed to square him up.

It worked (you only need a slight squaring) and this again really impaired his ability to launch at me.

My next action was to grab his right forearm wrist area with my left hand, and my right hand grabbed his right shoulder and trapezius muscle.

You can have incredible ‘push/pull’ strength at the shoulder and trapezius area.

He was now against the wall, and my exit was clear to the doorway of the shop, but as both, you and I would expect he started to push back against me with his right arm.

This is incredibly natural to do if you are pushed you tend to push back.

But this is excatly what I wanted him to do because I had turned the fight from me against this huge maniac to my entire body against his right arm.

Yes I know he has all his other limbs, but he is simply thinking ‘he has control of my arm I must get it free’.

The next step was a pretty ‘nifty’ Judo style move, but in essence, as he pushed back I yielded and turned and swung him out of the door.

So now we have gone from one big maniac wanting to ram his right fist into my face to a big guy, off balance, who has just been thrown around by little old me.

I will gloss over all the rest, but in simple terms, he was easy to take down as he was off balance and once on his back he was quickly controlled.

I took the fight to one part of him; I could have hammer struck his collar bone, elbowed him in the face and then spun him around.

Or I could have chosen another quarter, maybe his right leg and grabbed it for a single leg take down before applying a knee lock (yes you can do them standing as well)

But the key is breaking him down by going after one section.

I never decide in advance what will happen in a situation.

I am not thinking ‘I will grab this, then do this ala Robert Downey Jnr as Sherlock Holmes (if you have seen the film you will get that).

Under pinning my tactics is simple, I fight how I fight. I just want the best start available. I need to make sure I stack the deck in my favour and in this case my plan was to take out the arm.

I  had a few ideas in my head of what I would do, but this happens way too fast to have a fixed plan.

This might be a strange concept to grasp but your training should kick in onto auto pilot once you start the ball rolling.

So once I had his arm he might have pulled in a different way, I wouldn’t have stopped and said ‘hey that’s not fair’ I would have just adapted, carried on and moved into something else.

This is what you get when you really know how to fight, your techniques become pliable, you are like water my friend!

Being One Step Ahead

Another trick in self-defence against a bigger attacker is constant movement; you need to always be in motion.

Always be one step ahead and never stay in the one hold or technique for more than a few seconds.

If you let him regain his balance, his wits and his backbone he will start to use his strength against you.

Sooner or later you will realise that tactics are everything in fighting.

You need to stack the deck so heavily in your favour that there is only going to be one winner, you.

Next week we will be opening admissions to The Self Defence Seminar.

This online event is not going to be for everyone; it is not for those looking for quick wins, fast techniques or flashy moves.

It is for those that want to make sense of their Martial Arts journey and learn how to apply what they already know in self-defence.

It is for those that want to have a deeper understanding of self-defence.

It is for those that want to learn tactics that can change their self-defence skills over a 30 day period.

I spent 17 years in the Police, I spent even longer in Martial Arts, and this is what I know.

This will be my knowledge laid bare in a format you can learn from, and I want to give to you generously.

You will have in your hands what I know.

I hope you will join us as I release details soon of how to sign up.