We Analysed Over 250 Knife Crime Incidents: Here’s What We Learned About Knife Defence 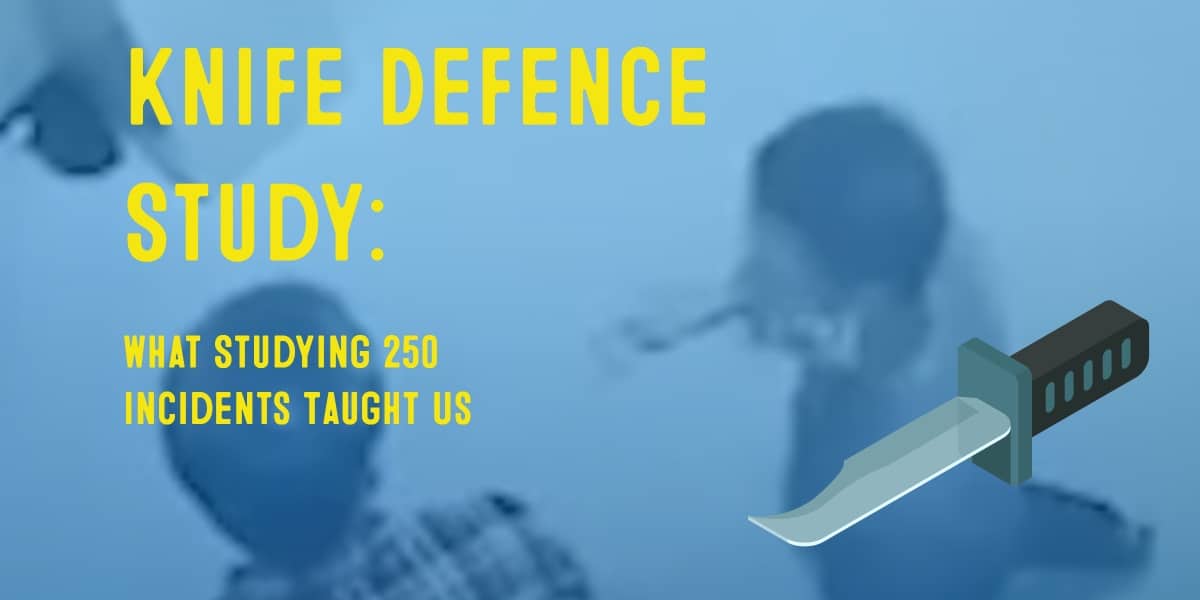 We analysed over 250 separate knife attack incidents caught on CCTV to assist Martial Arts and self-defence instructors to understand the reality of knife defence better.

Here's a Summary of What We Discovered

1. 54% of crimes observed occurred where the offender had concealed the weapon before the attack.

2. Civilian victims were most often attacked from the side or behind.

3. Professional victims such as police or convenience store workers were more often attacked to the front.

4. 56% of offenders displayed the knife openly before the attack took place.

5. 85% of attacks were ambush attacks, where the victim had no warning, zero pre-contact conversation and zero opportunity to avoid the attack consciously, they relied entirely on startle flinch reflex.

8. Only 16% of incidents observed were robberies and the majority of these robberies were within convenience store settings.

9. Just 2% of incidents were related to terrorism.

10. Disputes between 2 or more people accounted for 20% of incidents.

11. There was no indication that the victims who were involved in disputes were aware their attacker had a blade.

12. In over 50% of attacks, the victim defended themselves after being attacked, potentially they are protecting themselves whilst injured.

13. 14% of incidents involved the victim working in a professional capacity such as police officer or convenience store worker.

14. People who knew or engaged in a dispute with the attacker are more likely to be attacked from the front.

I have detailed insights from our findings below:

Why Our Study Was Different Than Others

Past studies into knife attacks tend to focus on the incident without examining the context.

Context is critical for self-defence; after all, it makes no sense to train knife defence based on situations that are unlikely to occur.

For that reason, we specifically looked at the situations and motives behind the incidents.

Also, our study was over 40% larger than previous studies, which has given us a more extensive data set to examine.

The study was completed by a manual process of watching over 250 Knife attack incidents captured on CCTV which has been uploaded onto YouTube.

Footage obtained was from various countries.

More Than Half of Offenders Conceal Their Knives Before Attack 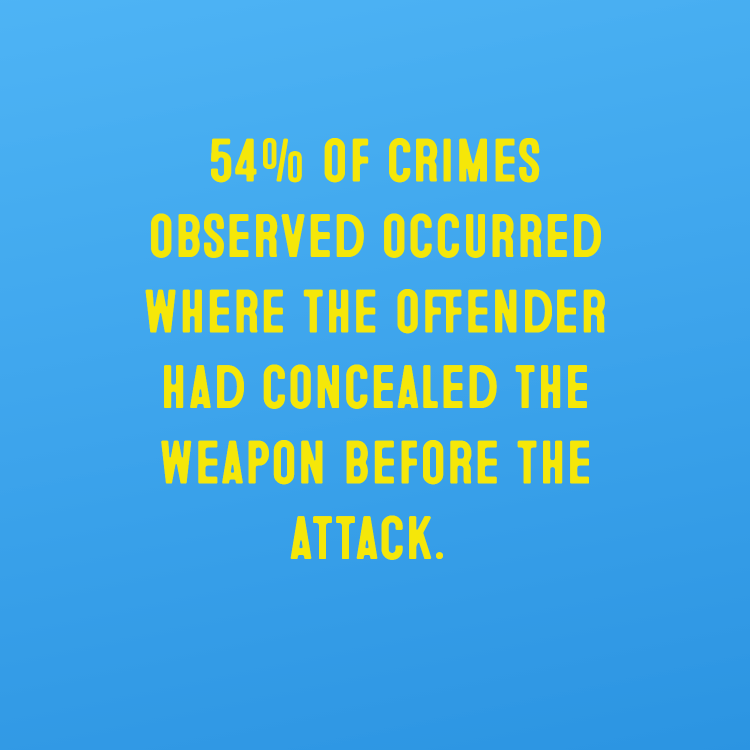 Knives are a particular problem for self-defence because they are so readily available.

Every home has them, and any offender can purchase a knife from any supermarket.

Knives are an accessible weapon for the criminal, but how many concealed their weapon before attack?

Half of the offenders displayed their weapons openly before the attack, and the other 50% concealed them until the last moment.

The reality of this situation is that over half the victims had no chance to defend themselves.

This incident in Manchester in 2018 left a man with severe injuries and serves as an example. 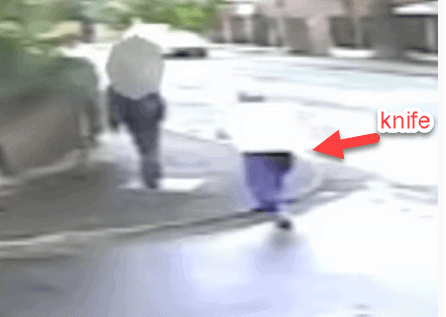 The offender was walking along the road until a random victim appeared, and he ran towards him. Up until this point, CCTV showed that his weapon was hidden entirely.

Once he saw his target, he sprinted after the victim and stabbed him repeatedly. 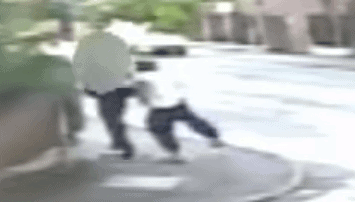 The incident lasted less than 10 seconds before the offender ran off.

This evidence tells us that the vast majority of knife defence techniques are wrong.

Most deal with an offender who displays the weapon openly, attacks via the front and gives you time to prepare or at least defend yourself.

When in reality, over 50% of victim defence starts from a position of being injured or having a knife wielded at them.

This information should be something addressed in scenario training.

Most scenarios, the students of self-defence are well aware of the threat before undertaking the drill.

They know their attacker has a knife.

Therefore adding a concealed weapon and bringing it out during grappling or self-defence sessions would add greater realism to any training. 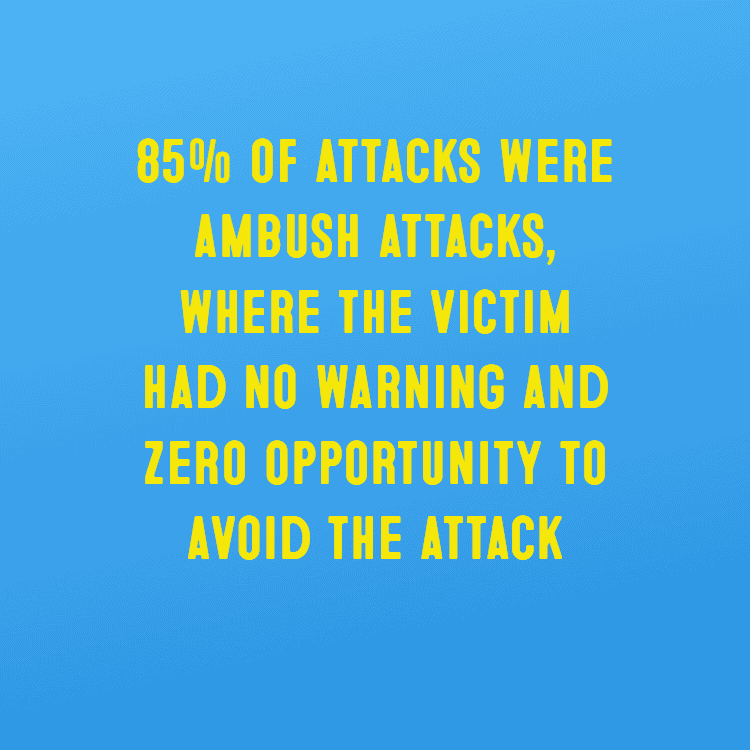 85% of attacks were ambush attacks, where the victim had no warning, zero pre-contact conversation and zero opportunity to avoid the attack.

The reality is that you are extremely unlikely to be able to defend yourself against the speed of a knife attack.

This data means that self-defence students should focus on a few critical areas:

1.  Ensure they have a greater distance between themselves and potential threat/ offender.

This means that a student would benefit greatly from undertaking training to increase their awareness/ ability to spot potential offenders.

Use self-defence lessons to observe how the posture and hands of an attacker change depending on where a knife is concealed.

From a blade hidden in a waistband, up a sleeve, in a pocket etc. Change drills, break down attacks that start where weapons that are concealed from every possible position.

3. Start from a position of injury.

The reality is that you will be injured before you can defend yourself.

As such, consider tying up one arm of the student, or make them undertake severe physical training before knife defence training to weaken students.

Also, start drills where the student is on both knees and cannot stand, or even lying down with their hands actually on an injured body part.

4. Watch people who are standing within 2 metres of you.

You have greater reaction time in a 2-metre distance, so anyone within your 2-metre distance arc is capable of hurting you without giving you the ability to defend yourself.

As such, anyone within 2 metres of you could pose a threat with a knife.

This knife incident at an A.T.M. is an example of the above.

The offender shows no warning of the attack and had the knife concealed. 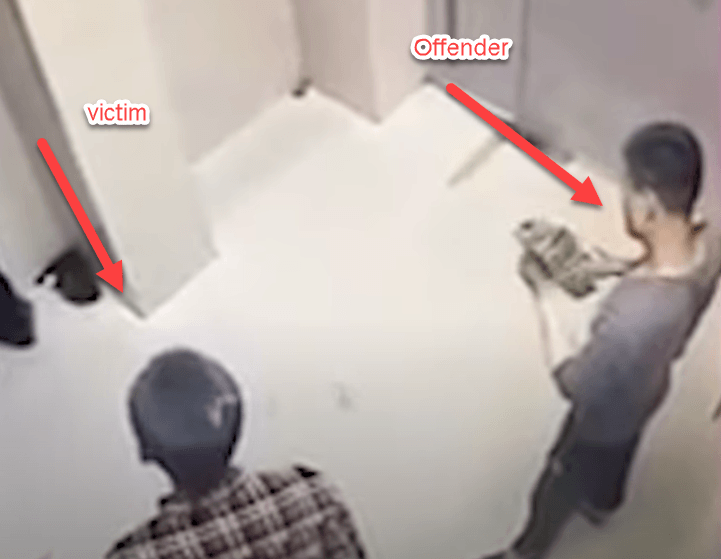 Yet without warning, they are attacked. 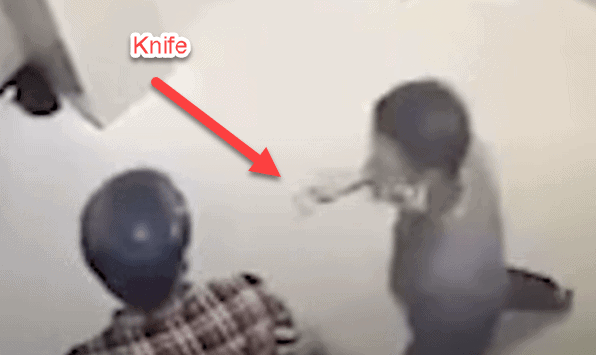 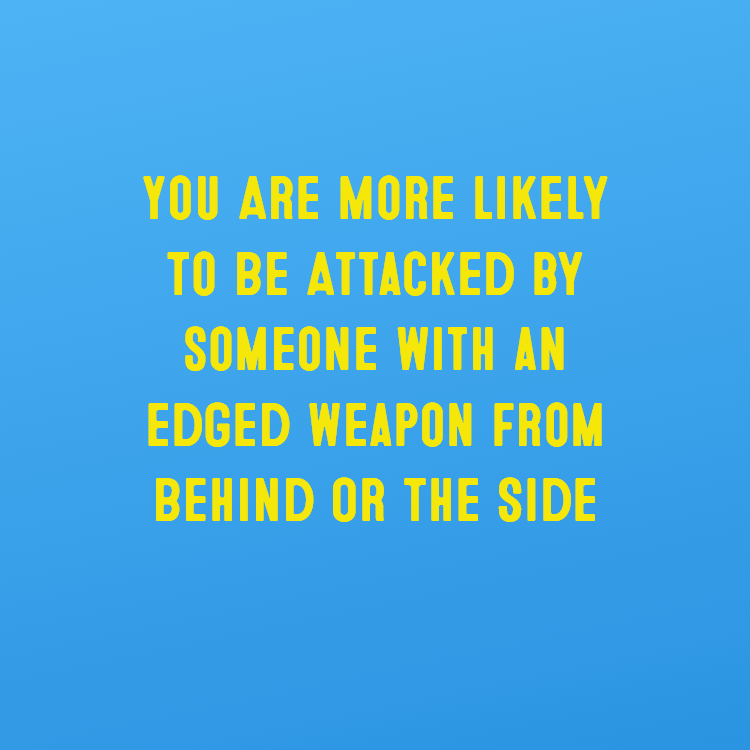 Before we started this study, there was a belief that the context of the situations matters more than self-defence instructors realise.

Yet, almost all 'knife-defence' techniques taught by martial arts and self-defence instructors are to deal with offenders attacking from the front.

Indeed a survey conducted of knife defence instructional videos on YouTube revealed over 90% of 'knife-defence' training videos dealt with attacks where the victim was directly facing the attacker.

Our study presents data that shows civilians are more likely to be attacked from the rear or side.

Where as victims who were working in a professional capacity such as police officer or convivence store worker are more likely to deal with attacks from the front.

This data has huge implications for the self-defence industry and will require instructors to review their knife defence training for civilians.

Up until this point, in self-defence, almost all startle flinch reflexes are trained in line with the theories of Tony Blauer's S.P.E.A.R. theory.

The approach is all about jamming the oncoming attack (a haymaker) with an arm position that blocks the haymaker coming.

85% of victims relied on the startle flinch reflex reaction to defend themselves. By this, I mean that all defence came from a startled position (due to the amount of ambush/ surprise attacks and concealed weapons).

Therefore, it is believed that investigation into training this defence should be a priority for self-defence instructors.

It is suggested that a similar approach to S.P.E.A.R. is a possibility for knife defence, with a body and hand positioning that covers major attack areas, yet opens up offensive options.

The best suggestion for this at this time would be a cross body cover similar to what is used in boxing; however, this requires further research.

Train To Fight For Over 60 Seconds 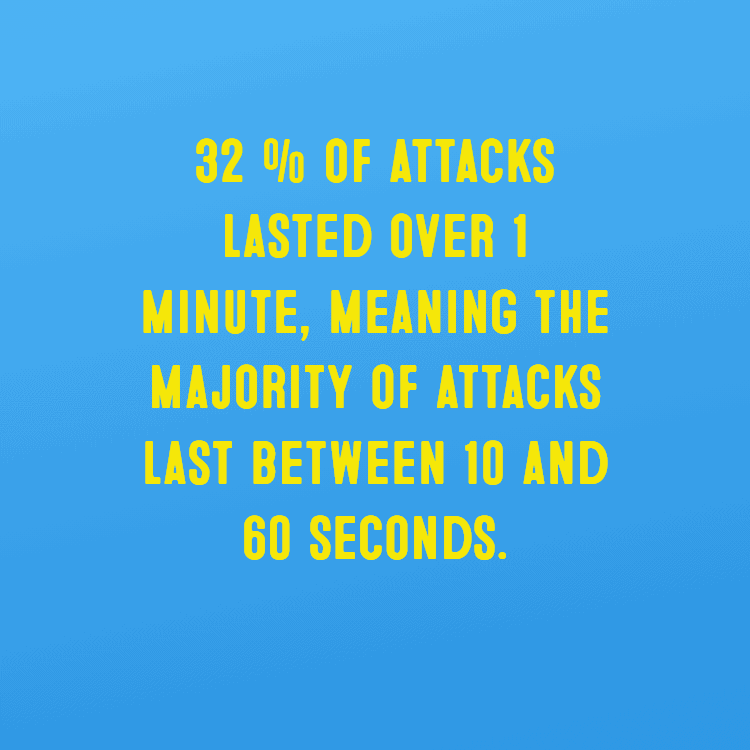 Our study showed that most incidents last between 10 and 6o seconds.

This data shows that students should train to deal with knife defence incidents that last over 60 seconds.

This is a direct conflict with most knife defence drills taught in todays self-defence and Martial Art training.

Students should be defending against a knife attack for over one minute, rather than to successfully remove the blade in a few 'flash' moves.

Suggested drills could include students starting with wrist control of a weapon holding hand and defending for 2 minutes, which could be started in a variety of positions.

Isometric muscle training also seems to be a logical step for self-defence students.

You Are Not Likely To Face A Terrorist

There have been many courses and instructors who have tried to market themselves as answers to terrorism.

Yet our data suggests that terrorists account for only 2% of incidents that we studied.

As such, it is doubtful that you will have to deal with a terrorist incident involving an edged weapon.

Treat People As If They Have A Blade 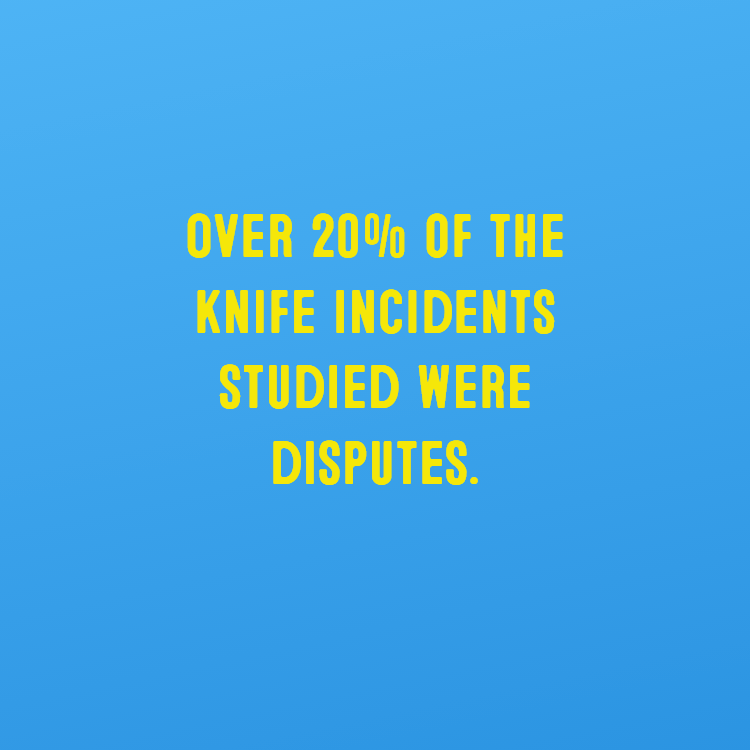 Over 20% of the incidents studied were disputes.

These were disagreements between 2 people where one party didn't know the other had a blade.

While 20% may sound a low number, this changes when we change the competitive set.

By considering that 2 out of 10 people in self-defence situations could be carrying a weapon they are prepared to use.

The best tactic is to assume that everyone has a blade and they may use it.

Your Aggression Might Cause The Offender To Pull Out Their Knife

In self-defence, many instructors have trained to display aggression in the face of threat.

This method shows the attacker that you are not a weak threat and are not to be attacked.

Yet, the vast majority of incidents studied were ones where the victim showed aggression towards the offender.

The learning point here is that if you want to avoid conflict and also dissuade the attacker from using their weapon, a less aggressive and calmer approach is potentially a better approach.

In the incident below, we see the future victim in dispute with an offender.

He is being held back by his friends while the offender with the knife is on their own, and the weapon is concealed. 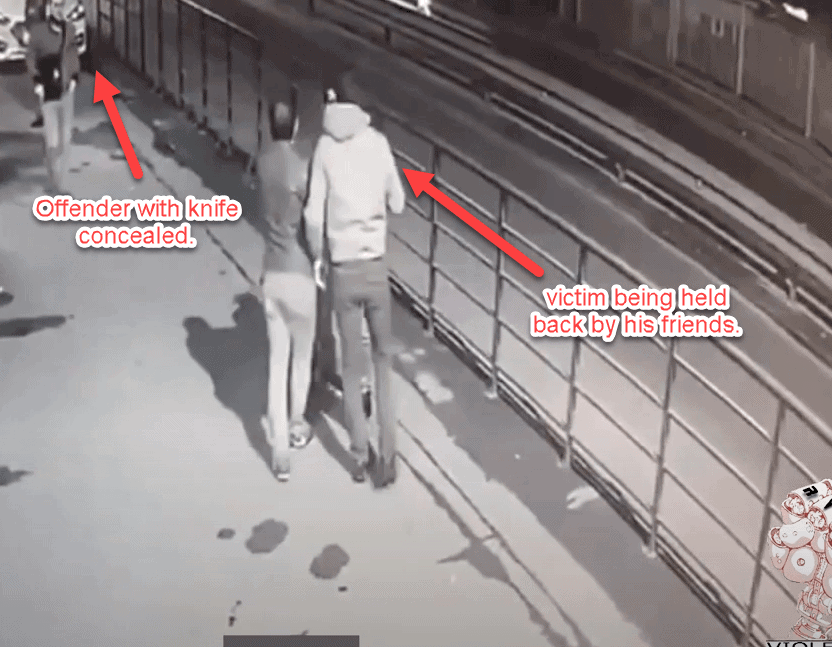 The offender then approaches the aggressive male, and fatally stabs him with a concealed weapon. 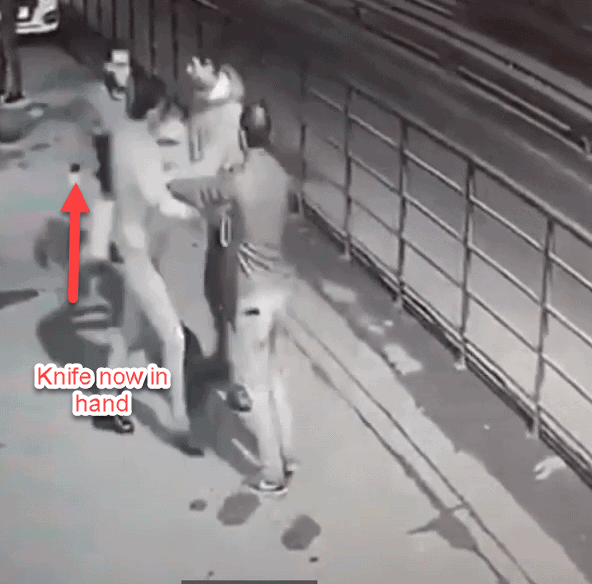 Our study was conducted using an independent researcher who studied over 250 CCTV incidents on YouTube and 3 independent sources double-checked this data to ensure it was correct.

So, what do you think of this data?

Does it match how you train or how you believed knife defence incidents took place?

P.S. I would also like to thank Defence Lab instructor Bethany Dean for her help pulling this post together.