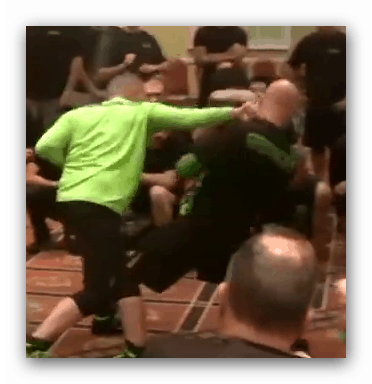 If you are not aware the new self defence and martial arts phenomenon known as Defence Lab is sweeping the world, literally.

The video you are about to see is from the latest New York Instructors conference that was held by the Defence Lab Team. Now I have been lucky enough to chat with the founder of Defence Lab- Andy Norman a few times and know that he really has created an amazing self defence system.

Andy Norman has a vision of how self defence should be taught and that vision has a form in Defence Lab.

Now I have trained in Defence Lab and you can read about that here and I know that Defence Lab is special but how do I know this?

I first found Keysi Fighting Method from magazines like Martial Arts Illustrated and I was desperate to try it. So I organised a seminar with the system. I was blown away and even wrote about it in Martial Arts Illustrated Magazine, yet I didnt carry on training with it. There were a few reasons for this and mainly because I was on my Judo journey to black belt so I stayed with Judo but always kept an eye on Keysi.

When keysi split I was shocked, but intrigued to see what Andy Norman would come up with next and when I got a chance to sit down with Andy Norman to chat about Defence Lab it was clear that he had laid Keysi Fighting Method to bed and well and truly put it into the past.

Over dinner one night ( a nice curry) Andy and I chatted and I learned the scope of Defence Lab, not just from a business perspective but also from the technical perspective. Sat across from former world kickboxing champion and Defence Lab expert James Boyle, Paul Strauther and the rest of the DL Top Team I learned that Andy Norman has taken what he built with keysi and totally evolved it.

Andy Norman explained that from endless hours of experience, experimentation and a lot of blood sweat and tears the new Defence Lab was born.

And especially for all those who are trying to rip the old keysi moves off (if I see another person re name the Pensador Im going to vomit) you just simply are not in the same league. Defence lab is true innovation.

Defence Lab has not re invented the wheel but created a jet powered flying version of the wheel instead. With new techniques and concepts that truly make your jaw drop!

I will finish with this:

I Have been around the self defence game for a long time and this is the only thing that has got me excited in a very long time. Its brilliant and trust me you are only seeing the tip of the iceberg right now, there are some major Defence Lab things on the way.

Now if you really want a glimpse into the world of Defence Lab this new video has more than a few scenes to blow your mind and as always please share this article: