Peter Sciarra- The Dawn of a new era in self defence Training! 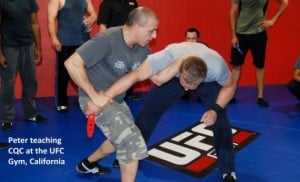 The Best Self Defence Instructor in the world is a title that would be under dispute by many people. After all coaching self defence has many layers to it including he soft skills such as awareness and verbal de escalation to the physical skills of the actual fighting.

There are of course many people who could step forward to claim the title of the worlds best self defence instructor if there was to be a competition for it from Geoff Thompson, Peter Consterdine, Richard Dimitri, Tony Blauer, Mo Teague, Hock Hockenheim and many many others. Its probably right that no one has ever officially received  that title because there are so many class acts out there. Yet despite this there are room for more and one such amazing talent is Peter Sciarra. However lets take a look at him in action before I reveal details of this amazing instructor

Like a lot of people I first heard of Peter from his youtube videos and was amazed at them, his speed and skill was simply awesome. Im not often blown away by someone because there is so much trash out there on the web in the world of self defence instructors, yet here I was watching the videos above and simply blown away at the skill level on display.

Now there are a lot of people who talk like they a good self defence coach, yet few out there that can deliver the goods on a physical level. Its a strange fact that in an era of keyboard and facebook warriors we have a guy here is has gained  an International status as a great coach by simply showing what he can do. Actions can speak louder than words and Peters skills certainly speak volumes! There is something almost poetic about that. Someone in self defence who is a do’er and not just a talker.

Immediately I searched the web and discovered that Peter lives in the sunny land of Australia and I wanted to know more about this guy, what system does he teach and where did he learn such amazing skills? So I simply got in touch and thankfully Peter has supplied the following information but before I write any more this is what Hock Hockenheim had to say about Peter Sciarra:

“Peter is a fireball when it comes to fighting and combatives.”

Peters Training in his own words:

In the mid 80s, I started training when I was 13 years in a system that Incorporated Wing Chan,Japanese ju jujitsu and Kick boxing.

I was introduced to integrating Martial systems right from the start, and I never did the traditional thing. Got my first black belt when I was 16.I was extremely dedicated,training up to 3-4 hours a day. This really set a solid foundation for future training.I also got into weight training form a young age.  I even built my first gym set out of bricks and broom sticks when I was 12 years.

Having chronic asthma as a child and a stutter, I was often pick on school by bullies at school ,I was always sick and underweight.This was my initial motivation to train. Between 17-20 years old I competed in Body building competitions,winning a Junior Mr Australia title at 19 years old. At this time I began working in the security industry as a bouncer.I was involve in my fair share of violence, I quickly found out what worked and what didn’t. This is when I really started to develop my own way of fighting.

I continued training in Muay Thai/Kick boxing for number of years.But my true passion was always realistic street self defence. The rules and limitations of combat sports always bothered me. In 2001 I discovered Hock Hochhiem’s Close Quarter Combat System. I trained in Australia for a number of years,then made multiple trips to the U.S to train with Hock.I also did a quite a bit of wrestling and BJJ training. In 2006 I received level 10(black belt equivalent). I taught students mainly out of my garage for a while, then in 2010 I started ICS (Integrated Combat Systems). I liked name because it had no limitations and could evolve.

Being a unknown instructor,I put out a number of videos on youtube of me doing my stuff,this got a lot of international attention. As a result I have taught seminars in around Australia,U.S, New Zealand and Hong Kong and I will coming to Europe this year.

WOW!! What an honest article. Now I do not know if Peter is the best self defence instructor in the world but I can simply tell by looking at his combination of experience and skills he is among the best out there. My verdict is simple if you can get a chance to train with Peter then do so, he is available for seminars across the globe and his website is https://integratedcombatsystems.com.au/main/page_home.html where you will find all his information including how to contact him.

Peter is one of a few instructors out there who are ushering in a new dawn of self defence instructors who are able to mix grappling and  striking, weapon work and awareness and avoidance into one amazing package. personally this is the direction that quality self defence training needs to go in and I think its fantastic that Peter has taken the brave step to put his stuff on the web and showcase his skills.

Peter is a down to earth person who I look forward to training with one day. Without doubt its easy to say this:

“Peter Sciarra simply is one of the best self defence instructors in the world. Just watch his videos and see real skill in action!”