Phil Norman’s Ghost: A Review of The Training Pack 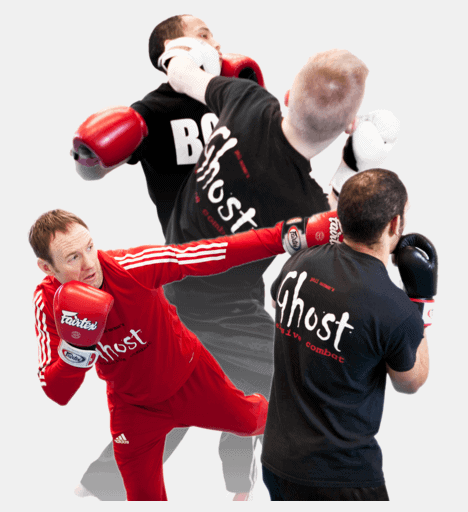 Review of the Ghost by Phil Norman training pack

Welcome to the review of Phil Normans Ghost Training Pack. In this I will tell you why Ghost is a must have purchase, I   however, explain the risks of using it as a base system for combat and explain why it is great for .

I have only met Phil Norman a few times in passing and never trained with him, however like many I knew him as the winner of the TV fitness show Gladiators. Phil was the  star of Saturday night TV in many households as he battled the TV gladiators.

In real life, Phil Norman is the real embodiment of a Gladiator. who has fought in MMA  on numerous occasions. Had his career in  martial arts started now I think he would easily have become a UFC fighter.

So when I heard about his new fighting system called Ghost I was immediately interested.

Now let  me say this, I know the sport of boxing well. Although I never turned pro I had offers for  both boxing and MMA. I know that I would never have been a champion as I lacked a fighters mentality or the skill base to compete with the best. I did end up being a boxing official for a brief time so I have a good level of  knowledge of both pro and amateur boxing.

Ok, so  now I am going to tell you all about Ghost and why you should give it a I am also going to be very clear about the risks of using Ghost!

The Ghost training pack follows the same model as the Defence lab training pack, this isn't a shock as Defence Lab and Andy Normans  team have created this for Phil. It is a  pre cursor to a monthly university that will be coming out. This is the same process  that Defence Lab used to launch their DL pack 1. It is  a bit like dipping your toe into the water.

The content is split up into 5 sections with 3 or more videos in each section. ​The sections are:

​The sections provide a short introduction from Phil about each tactic and technique and then a few videos of the techniques as well.

The idea behind Ghost is essentially an evasion and striking system but let me be very clear  it is nothing new. This style of punch and move has been used By Herol Bomber Graham, Naseem Hamed, Johnny  Nelson and many other fighters throughout the years to great success. Check out Naz in action in the video below.

In essence this is what Ghost  is,  however, it has  never been publicly taught on video (to my knowledge) and I am sure that Phil Norman has created his own variations of this style of fighting, but in a nutshell it is an evasion and striking system, akin to 'switch hitter style'.

There is no doubt that this type of fighting style is effective and  Phils protege in the training pack Jake Clarke recently became the class  B ABA boxing champion of England using this style. The ABA boxing championship is a highly sought after prize and to win it at Class B is a massive achievement and shows just how effective this evasive system is.

That being said it comes at a risk and if  you chose this as a platform for your style and you need to be aware of this.

The Risk of Evasion ​

Herol Bomber Graham was one of the best British boxers of all time and he suffered one of the worst Ko's of all time as well. Naseem Hamed was  taken apart by  Marco Barrera over 12 rounds also.

The reason we do not see many using this type of fighting is that it requires immense reflexes, speed and also balance to pull off. During any fight those skills erode after taking shots and of course they also erode as fatigue sets in. Check the video below to see the KO of Bomber Graham.

​How and Why You Should Use Ghost

It would be a mistake for boxers to come in and try and be the next Naseem Hamed by using Ghost. That is not what this in my opinion is for, however you can add a huge new dimension to your ringcraft in both boxing and MMA, not to mention your self defence skill. If you do what I suggest next.

Ghost is a model of evasion, a style of defence and this is exactly how you should view it. In this way it is is simply brilliant. It is not in my opinion a way that you should choose to use as your fighting style unless you naturally possess great speed, reflexes and fitness.The sheer amount of cardio required to use Ghost over 12 rounds would be incredible.

Why ​Ghost Is an Essential Purchase

Despite the I have raised I still see Ghost as not only an essential purchase but essential training.

I am yet to see a product that has been focused on a defensive method that also helps you attack at the same time. The result is that fighters and everyone else now have a go-to guide for evasive fighting.

If you have ever fought a hard puncher then you will know that you need to find a way of dealing with those big shots and winning.  I have personally been in situations where Ghost would have allowed me to win if I used the strategies inside the product.

Ghost For Self Defence​

The applications of Ghost are one of its most appealing features because it is ideal for street application. The use of and pivots will  take your skills to  a whole new level. Granted the product does not focus on this aspect, but trust me it is a great addition to the often neglected aspect of evasion.

What Ghost does is  take a style of boxing (the evasive style) and make the components of that accessible to everyone. It does  that in a way that is simple to train and use. The product is well filmed and at a good price so in my opinion this is the MUST have of the year for anyone involved in martial arts or boxing.

If you buy Ghost you will suddenly have a new aspect of defence in your fighting arsenal, and I see Phil Norman as becoming in huge demand across the globe for this training.