Its been a while since I have posted anything and to be honest there have been several reasons behind this. However among the largest has been the launch of my own personal training and fighting system called simply Primal.

This had its first glimpse to the world at Solihull self defence when I was booked to do a short 3 hour workshop. Now the reason I like 3 hours is because it is cheaper for all those who attend, it is fast paced and it gives people a chance to get an idea about what we are about. I’m a big fan of 3 and 4 hour workshops!

This is an interesting question which I get asked a lot. The truth is quite simple. It is a complete self defence system designed for one purpose: To teach people how to deal with violence and protect their loved ones from serious physical attack!  It is not a low level product this is serious stuff for serious situations (I do teach low level self defence strategies and techniques for those less able or inclined in my Stay Safe talks). So Primal is a very complete self defence programme that has ALL aspects of modern self defence included.

Now before people start the usual by saying “nothing new there” let me add this. There is nothing new at all in nay system or art, we all are human beings and are limited by movement and our muscles and bones. Humans have been doing martial arts for a long long time and everything has been tried and tested before. However what is important is what is and what is not included. The way we train and what we are actually training makes the difference after all there are a lot of ways to train the straight punch, some are effective and some less so but its still the just the straight punch.

I’m a big believer that we are all in our own fights! This isn’t about being the best in class but its about being the best you can be and Primal is focused on not delivering just a series of techniques but actually training the individual. This is a concept missed from a lot of martial arts who are very heavy on syllabus and techniques and gradings. Instead I sought to borrow a lot of training elements from boxing where the student or boxer is being trained to fight. It is not about the system its about getting the person ready for combat.

As you can see form the clips we are about fast explosive movements which are powerful as well as technical. Its not about “grab here, then here and this happens”. Things go wrong in real violence and as a result we train to deal with whatever is happening. Its a process designed to bring out your fighting instinct.

“I had a great session on Sunday. The whole seminar was well planned, very well presented and fast-paced. As a man in his mid-fifties, I am happy to report that Primal is not just for young shaven-headed, super-fit men but can be utilised by the average man or woman in the street. Clearly, much thought has gone into its creation. I would recommend Primal and Andrew to anyone, or any group interested in self protection “

“Enjoyed it very much” 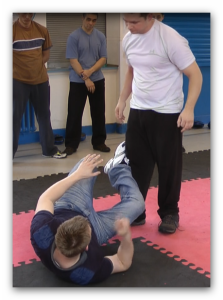 Now many of you will be think , yes its just another self defence system there are so many. However let me say this, I felt I needed to create Primal because there really wasn’t a serious option out there for people looking for high level self defence training. With the collapse of Keysi (I know it still exists in a new form) the market really had  only a few options from Krav Maga, Defence Lab and FAST but after that there really wasn’t much around in the UK and everywhere else. None of those really did it for me based on my own experiences.So I sat down and made what I feel is the PERFECT self defence system.

This is a training programme you could study for the rest of your life! It is that in depth but at the same time it delivers results very quickly.

Now I will be posting more on Primal but we are getting booked already and will be in London soon. So if you would like to see what the hype is all about then book me for a seminar or workshop via our seminars page. It is not a bolt on to anything, it is a complete system of self protection that is not some hand me down from the military. It has been purpose built and I assure you you will be blown away. For more information please get in touch.