How To Win A Fight On The Ground: The 9 Laws of Ground Fighting

Can you win a fight if it went to the ground?

Well in this article we are going to teach you 9 laws that will help you to survive any ground fighting situation.

But first, we need to debunk some myths.

There are three myths that are going around and have been for years when it comes to self-defence.

Myth 2: Never go to the  ground

Myth 3: If you end up on the ground get up as quickly as you can. 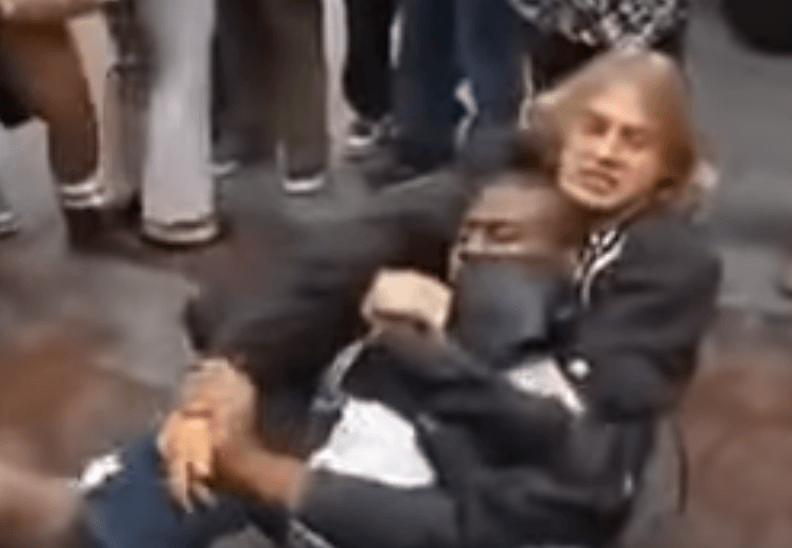 Now Let me be clear, each one of these myths has been spun by people for their own interests, be it teaching a system, selling books, seminars or DVDs. They are all totally false and I will explain why. Then I will give you the 9 ground fighting self-defence laws you need to follow.

In almost all (at least 95%) of the fights or attacks, I have ever seen one thing happens. Either both people end up on the ground or one is on the floor and the other standing.

The reason is simple, if one person hits harder than the other (or catches them) they usually end up knocked out on the floor or knocked down.

Another way it happens is when 2 people end up in close range and they grab each other, and either they lose balance and end up on the floor.

And of course, finally is the situation I have seen more of lately. One person deliberately takes the fight to the ground with a takedown.

So yes, the fight always ends up with someone on the ground. The key factor is if one or both is conscious when it happens.

Myth 2: To tell people that they should never go to the ground is the hallmark of people who have only experienced a limited number of self-defence situations.

Check out this weird example which shows that people do not always join in!

One person criticised the previous article I wrote on the lies bad self-defence instructors tell their students.

I do not know where these people get their knowledge from (Oh I do, their imagination).

The whole purpose of going to the ground is to increase your odds of survival, because if you get knocked out, you might be killed, not only from the punch but from the secondary impact as you fall.

If you take a person down, you will want to be in a dominant position where you can end the fight quickly. The knee on the belly is a great example, where you can still cover yourself and hit them very quickly.

Myth 3: Get up as quickly as you can.

Are you serious? I have heard this from another ageing guru talking rubbish the other day.

The truth, you need to get up as carefully as you can and only when the time is right!

The process of getting up off the floor is where I have seen most people become seriously injured.

Scenario (I witnessed this one too):

A guy is out with his wife on the town and at the end of the evening, they get a kebab.

Inside the kebab house a guy starts to become aggressive, he is drunk and an idiot but still it happens.

The two men end up fighting after the aggressive man throws a punch. They grapple and the husband ends up on the floor. He gets up and boom gets kicked in the face and is out cold.

As we will see in our laws, it is not, nor ever should be about getting up quickly.

So, with the ground fighting myths debunked, let's look at the laws.

Do you want to know why so many people say "Don't go to the ground"?

It is because they treat going to the ground and standing as a separate activity when there are lot's of stages in between where you can gain an advantage.

You need to train transitions.

Here's how: Get in class and go over all the positions you can end up in a  self-defence situation on the floor. You on top, him on the bottom, you on your side, them on their side, etc, and also think how you would have got there. Perhaps a deliberate takedown, perhaps a stumble, the list is endless.

Think up as many as you can and write them down.

Next start looking for the techniques you can apply in those situations to end the fight quickly or to get up safely.

Start with the takedown/ situation and make it real (yes, roleplay if you have to) then drill the technique you use to finish and back up again.

This is exhausting work but worth it. Why?

Because when you end up in a self-defence situation and you end up in that position on the ground you will automatically go for the fastest way to end the fight or the safest way to get back to your feet.

There are no submissions in self-defence. If you put on an armlock or foot lock, you need to break the limb.

This is a mental issue for most. Breaking a limb is not a nice feeling but if you end up on the ground you do not want to stay there for long!

Rapid limb destruction is not about applying a technique slowly as grapplers are taught. It is however about getting a lock on fast and putting all your might into breaking the limb as quickly as you can.

You should never hold a lock for more than 3 seconds in the street. If it isn't broken by then, you simply need to do something else.

The goal is to crank on that limb as your life depended on it because that is what we are talking about here: your life really will depend on it because when you go for a limb destruction, you are at your most vulnerable.

You have no cover or protection and you have all your limbs controlling the attacker.

This is no time to be slow and steady.

Law 3: The Kimura and Omoplata Are Your Best Friend

There are few techniques in martial arts that are as devastating as the kimura or shoulder lock (I will cover the next one in a minute.)

If you get taken to the floor, the Kimura can be used to cause serious damage and in the process, you can get to your feet and will have seriously damaged the shoulder.

I have seen people fight with broken arms before but, not a broken shoulder (or leg).

Check out the video below to learn how to do a kimura correctly.

The other technique you need to learn from your back is the Omo Plata. This nifty little move is ideal for self-defence situations because once applied it leaves your hands free  so you can cover your head but, to be honest, the move is so powerful the fight will  be over in seconds

Check out this great video  from Erik Paulson on Kimura's

Law 4: The Russians Were Right About Leg Locks

I have been lucky enough to see world-class Sambo fighters and let me tell you this.

The Russians were right about "break a man's legs and it takes two to carry him off".

Years ago I wrote an article on leg locks for self-defence and my views are pretty much the same!

Ok here is what I  mean. If you end up on the floor and you are in a position where the attackers leg is there for the taking, break it!

Because a man really can not fight with a broken leg.

I am not saying that you should start doing leg scissors or anything like that, but training leg locks are great especially if you are on the floor and they are standing!

Law 5: The Choke Should Only Ever Be Your Last Resort

If you choke a person out you are cutting off the supply of blood and or oxygen to the brain. This = death if you do not let go quickly enough.

A choke is a highly effective but very dangerous move that basically can KILL and do so very quickly. I  suggest chokes are only useful for situations that result in an immediate and definite threat to your life!

I first learned about constant movement from a Frank Shamrock seminar and it goes like this:

Put your hand out and ask a friend to grab your wrist.

Next, put your hand out and start to move it in a figure of 8 motion but stop-start and change directions.

If you hit the deck in a self-defence situation you have to move, either go for the finishing move to escape a position or look to get up. But never stay still!

Law 7: Look Around You

The one issue with people when it comes to ground fighting in self-defence is that they think you lose the ability to look around you.

Nothing could be further from the truth.

You should be on the floor but also still looking around you, behind you and watching out for that risk of someone joining in.

To start to gain this skill, try and perform your groundwork blindfolded. Next, add a third person who can circle you and tries and smacks you or kicks you.

When you start talking about groundwork on the ground in self-defence situations you see people think of it as just grappling. Hold on, people will be striking you too!

You need to be able to cover as well. The master of this type of work is Andy Norman; he has created a great method of ground striking. Although the below video is MMA based, you can go to www.defencelab.com and there are a lot of videos on the site that show the groundwork you need in action.

Law 9: Get Up Safely Not Just Quickly

The final law we have is simple. Get up safely.

People tend just to tell you to get up off the floor as quickly as you can. WRONG.

You need to get up safely off the floor. Be covered at all  times  as you are most vulnerable when getting up

You need to have a skill base that allows you to make smart choices.