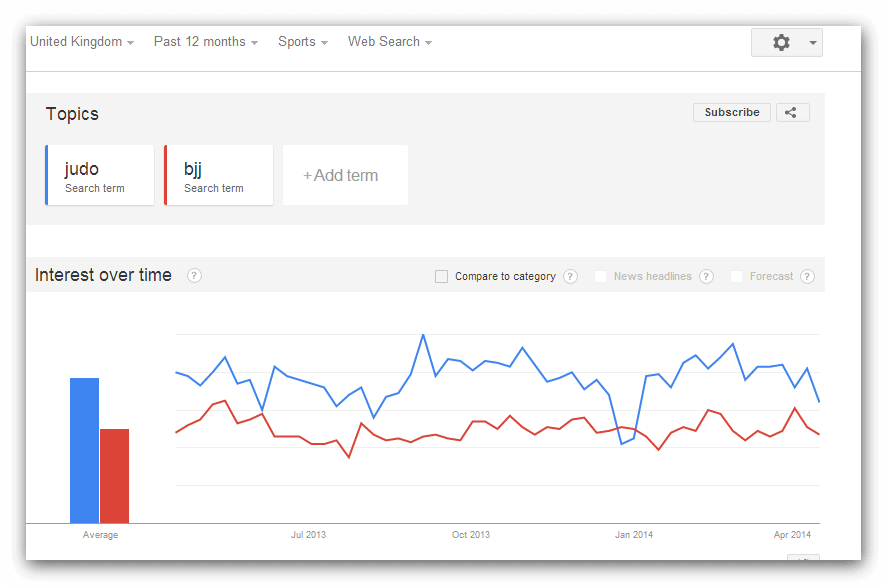 In the UK Judo has had a very strong position but it would appear that for the first time ever, Judo lost out in the popularity stakes officially as it dipped in search interest against BJJ

The data above comes from Google trend and that is not by any means a great and official guide as it records search interest. BUT!!!! its is a nice tool to use as it gives us a real idea of the search behaviour of people.

We can see from looking at the data above that in January 2014 Search interest for Judo officially dropped below the search interest for BJJ. Yes interest resumed after this point but the gap is really closing now and I dont think it will be long before BJJ surpasses Judo in Search popularity all together.

WHAT DOES IT MEAN?

Well it can be interpreted in different ways but how does it feel? By this I mean really ask yourself what really is going on out there. In my experience it is simple.

JUDO IS NOT GROWING ENOUGH AND BJJ IS!

This is really a simple point of view but I think its a true reflection.

If you recall in my previous posts on Judo I met with the heads of British Judo 2 years ago and gave them a stack load of ideas to grow their business and at the same time British Judo. It centres around basic marketing and business goals. However lets go over them and add another I told them to do (I wasnt alone in this view). To read the other articles click here and here.

If you look at the video below you see the Gracie Jiu Jitsu programme called Bully Proof which is in my opinion the best martial arts product ever created. The sheer depth of the programme is light years ahead of everyone else including any education authority.

I told British Judo (along with another person who was working with them) that they need to get a programme like this. Its not rocket science but it comes down to great marketing and of course a great product.

Along with primary school, children they needed to engage with other markets including the high school students. For that I believe and told them that a programme called ‘street safety’ or similar could be an excellent tool to challenge gangs, respect and general teen safety in many areas.

This idea which I talked about here was designed to keep Judoka inside Judo clubs by developing their Newaza. Focusing on a  multi media approach, combined with a dynamic competitive format to encourage more groundwork classes at clubs.

Judo for Self Defence

The jewel in the crown of British Judo should have been their Judo for Self Defence programme. Finally something that allowed people to engage in Judo but in a far less physically demanding format and all geared for self defence. Think of it as like krav maga but the Judo version with other aspects such as personal safety and even door staff training programmes.

Now none of this happened, none of it.

I love Judo and think it could be huge, and it should be however not if it continues along its current path. Traditionalists will feel that Judo should be changed however its not about changing Judo its about creating other products that sit along side Judo, all of which bring more people back into Judo.

I know some of the major people in the UK martial arts scenes and I know what can be achieved to help British Judo. Getting a load of facebook likes isn’t the key here. It goes far beyond that and I truly wish that British Judo would start to look up and see what’s going on around them.

Its not Too late

What is annoying is that Judo can make changes that work and cost very little money. Its not cash that drives this but effort and creativity.I love Judo and it can make a major come back but not if it keeps doing what it is doing!  I take no pleasure in writing these stories about UK Judo however growing UK Judo has little to do with winning medals and everything to do with engaging with the public. Just ramming the ‘come to Judo’ message down people throats isnt working, you need to be more subtle than that.

I believe Judo can grow and do so at a previously unheard of rate however it takes immediate action!

What are your thoughts?