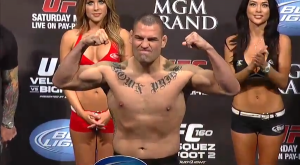 The UFC166: Velasquez vs. Dos Santos III PPV is set to take place on Saturday, October 19, from the Toyota Center in Houston, Texas. It’s the rubbermatch between the two best heavyweights in MMA over the past 3 years or more.

I want to take a look at some of the top thoughts and questions going into the event. This will be a little different format than the top questions posts I used to do as I want to be able to touch on a few more items on the card. Let’s get to it:

The winner of the rubbermatch between Cain Velasquez and Junior dos Santos could arguably go down as the best heavyweight of all time(Fedor huggers…bring it).

Cain Velasquez has destroyed every fighter he has ever faced, including Junior dos Santos, who’s the only fighter to ever defeat him. He’s defeated Antonio “Bigfoot” Silva twice via first round stoppage. Silva destroyed Fedor Emelianenko and became the first fighter to stop him via TKO in 2011. He also ended the Alistair Overeem hype train with a devastating KO. Velasquez has beaten  Brock Lesnar, a fighter many thought would reign over the division for a long time(and he might have if he hadn’t gotten sick). He has destroyed Antonio Rodrigo Nogueira, who many believe to be one of the top three heavyweights of all time, finishing him in the first round, whereas Emelianenko could never finish the Brazilian in their two fights. If Velasquez bests dos Santos on Saturday night, there’s not really a heavyweight out there that would be favored to beat him anytime soon. That means he could go on an epic run and arguably surpass Fedor Emelianenko as the best ever at heavyweight.

The resume of Junior dos Santos may not quite stack up to that of Velasquez just yet, but a second win over Velasquez wouldn’t certainly boost that quite a bit. Dos Santos destroyed Fabricio Werdum, the first man to ever legitimately defeat Fedor Emelianenko, and has defeated at least four ranked heavyweights since his UFC debut. He has a TKO win over Mirko Cro Cop who many would say is a top five heavyweight of all time. Dos Santos, like Velasquez, would be favored over any other heavyweight out there in future matchups if he could get past Velasquez for a second time.

I don’t like the Daniel Cormier vs. Roy Nelson fight. It’s not a smart fight for Cormier because Nelson is coming off a loss, and Cormier is coming off a win over a top 10 heavyweight in Frank Mir.

Cormier should be able to get past Nelson with his cardio and superior wrestling. He should then move down to the light heavyweight division as he said he would, and get things popping like bacon in the pan with Jon Jones.

The Gilbert Melendez vs. Diego Sanchez is a huge fight for both fighters.

Melendez can’t afford to lose this fight. A loss to Sanchez would be devastating as Sanchez is clearly on the downside to his excellent career(barring his limited skill set). Melendez gave former champion Ben Henderson all he could handle and clearly showed he’s one of the better lightweights in the world. An impressive win over Sanchez who has only been stopped ONCE in his career would be just what the doctor ordered to put him back in title contention. A win for Sanchez would breath new life into his career in his attempt to return to the lightweight division(he missed weight by three pounds in his last lightweight bout against Gomi).

Shawn Jordan could make himself a relevant heavyweight with a third consecutive win against former title challenger Gabriel Gonzaga.

Jordan has won two consecutive bouts via TKO which have sort of buried his terrible performance against former UFC fighter Cheick Kongo in 2012. Gonzaga has won three of his last four bouts in the UFC and experienced a sort of rebirth since rejoining the promotion. Neither fighter has no realistic chance of becoming a UFC champion in my opinion, but impressive winning streaks in a thin division go a long way.

John Dodson should put himself back into title contention with a win over Darrell Montague who will be making his UFC debut after winning his last four fights.

Which fighter between Nate Marquardt and Hector Lombard will make a statement on Saturday night?

Marquardt will be fighting for the first time since losing his Strikeforce welterweight title against Tarec Saffiedine in January. Lombard will be making the cut down to the welterweight division for the first time ever after competing as a middleweight. Lombard absolutely needs a win after going (1-2) in his first three UFC fights. Actually, this move to welterweight is moreso due to those losses and the threat of being cut from the promotion than anything else. He’s probably cut with a loss to Marquardt. If Marquardt can brave the first round, he should be able to take the decision as Lombard usually fades after the first round. The huge weight cut isn’t going to do him any favors either. I don’t think either fighter will be a factor in the welterweight division moving forward, but crazier things have happened I suppose.

Will the women fighters steal the show once again?

Sarah Kaufman and Jessica “Evil” Eye will be making their UFC debut on Saturday night, and I’m sure both will be looking to put on a show and represent for the females out there. Actually, I don’t think I’ve ever seen a boring women’s MMA fight in the UFC at this point. The women’s bantamweight division is in need of contenders, and the winner of this bout will certainly put their names in the mix going forward. This fight should be a good scrap.

Be sure to make ProMMAnow.com your home for UFC 166 coverage.  We’ll be here all week.  You can find information about the fight card here.