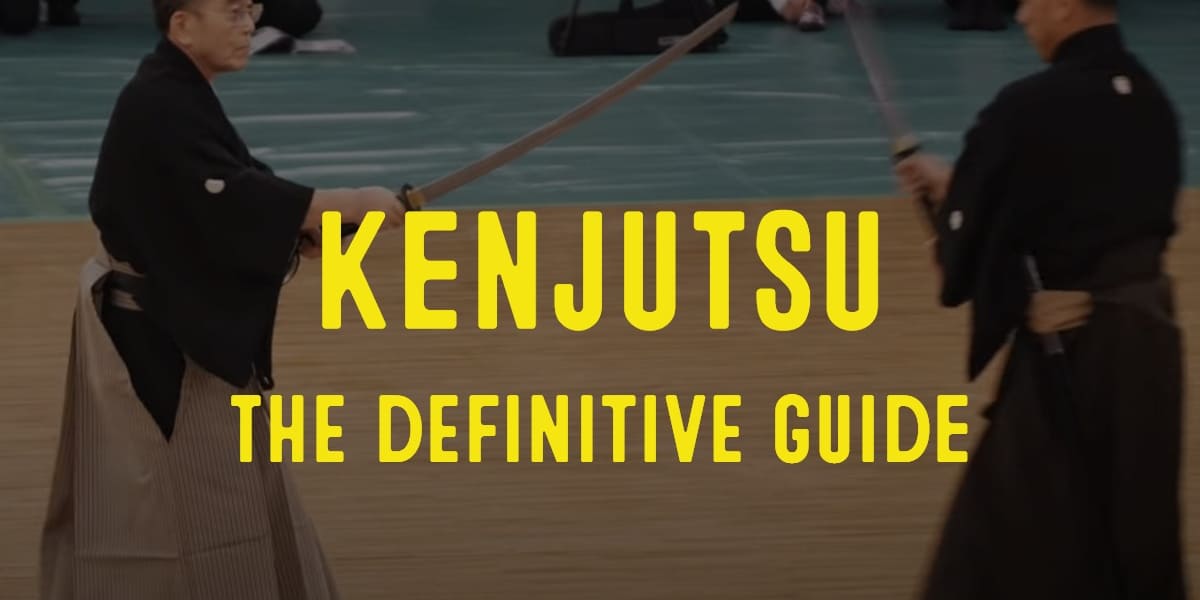 Have you ever heard of Kenjutsu?

Wondered what it actually is all about?

Well, in this article, we are going to break down exactly what Kenjutsu is.

From the History of Kenjutsu to how you can train it today.

Japan has been the home of many forms of martial arts, and Kenjutsu also originates from here.

The first form of this highly evolved martial art was seen in the 15th century as a training methodology for the Samurai class.

The art was incorporated into the Ninja culture in a short period.

Kenjutsu can be a solo sport or can be practised with an opponent if you so wish.

The martial art form involves swinging heavy swords of different kinds, and this is a great way of developing physical strength, self-improvement, and concentration.

Discipline is another by-product of this sport and the same filters down to every aspect of life.

The Kenjutsu exponent is called a Kenjutsuka, and it takes years of dedicated practice to reach this level of expertise.

The skills you can gain from this evolved martial art form are self-confidence, balance, coordination, and agility.

What Is The Difference Between Kenjutsu And Kendo?

Kendo is another martial art that is based on sword training and is somewhat similar to Kenjutsu, and people tend to confuse the two.

Kenjutsu has grown appreciably and includes sword-based training of multiple categories similar to the art of Kendo.

Kenjutsu is a sport that has multiple schools that teach different variations of the game, while Kendo has a single-minded approach that is derived from a sampling of the various schools of Kenjutsu. The 'Itto-Ryu' school of Kenjutsu has most influenced Kendo in particular.

Kenjutsu is violence based sport and is more based on killing, and there have been instances of people being killed even during practice sessions with heavy swords like 'Bokuto' or 'Shinken'.

Kendo, on the other hand, is more of a sport that empowers self-betterment and does not involve any sort of blood lust.

Kendokas are the exponents of the art of Kendo and use Shinai along with heavy padding while Kenjutsukas use real swords like Bokuto and Shinken.

Kenjutsu is restrictive in inclusivity, and it is nearly impossible to find a genuine Kenjutsu school outside of Japan.

Even in its native country, it is very difficult to gain entry to a Kenjutsu school.

Federated Kendo schools are much more inclusive, and you are free to join one to learn the ancient martial art.

The History of Kenjutsu

Kenjutsu is the privileged art form of the Samurais of Japan.

It is a highly revered sport and literally means "the method of', or "technique of" sword.

The Katana is the main weapon used by the Kenjutsu exponents.

They battle with actual swords, but some schools train with bamboo or wooden swords called bokkens that can mitigate injury risk.

Other schools use the Fukuro Shinai that is a bamboo sword covered with leather to practice with.

This is especially true for students who are novices and prone to getting seriously injured while learning the ways of Kenjutsu.

In 1868, Japan saw the dissolution of the Samurai class after the Meiji Restoration. This resulted in the unfortunate closing of most Kenjutsu schools.

The late 20th century saw a reinstatement of this war form as a sport and Kenjutsu regained its popularity as a path to self-improvement. The use of this martial art form as a self-defense form also gained favour.

What Are the Basics of Kenjutsu?

Although Kenjutsu has a varied interpretation by different schools that practice it, some basic principles are the same.

The practice, methodology and ethics are similar in nature.

Two Kenjutsukas perform 'kata', which are intrinsically contact strikes aimed at the body in some forms of Kenjutsu.

The original training involved the use of 'Kata' as the mainstay of the martial art form.

The later version also incorporated milder forms of sparring with wooden bokutos which are solid in nature rather than the more potent swords.

How Can I Learn Kenjutsu?

The newer schools of Kenjutsu allow students to join and learn the ancient Samurai practice in a modified and safer form as a way to acquire self-development skills.

You need to be eighteen or more to learn. Modern schools also allow you to follow online lessons and practice solo at home.

The teacher will encourage you to open your mind to him as you need to be teachable and can mold your personality as per instruction to get results.

You need an attitude to learn rather than physical strength to study martial art forms.

It is a long journey, so you must be ready to devote time to the sport and not treat it like a hobby.

In fact, you have to face an interview with the head instructor to gauge your readiness to learn.

What Swords Are Used In Kenjutsu

The main sword used in Kenjutsu is the Katana.

A Bokken or Bokkuto is a wooden sword that is used by novices to minimize injuries.

These are also dangerous as they have the ability to break bones.

The Shinai is a sword made of bamboo and covered with leather used by beginners practicing sword handling techniques.

There are many techniques that are practiced while indulging in Kenjutsu.

One is Iai Goshi that requires you to squat on the left knee.

The Omote Iaijutsu is the term used for the sword drawing or 6 kata. Tachi Iai is the technique that needs you to stand straight or walk while drawing a sword or 5 kata.

Omote no Kenjutsu is the basic technique that uses armored forms of using the sword to pinpoint and injured the unarmoured body parts of the competitor.

Bojutsu is the fighting techniques with a staff while Ryoto is the skill of fighting with two swords.

There are many other variations that you can learn.

You need a Samue or the loose Japanese clothing that is best for Keiko.

The Obi supports the sword and is worn like a belt. The Zori or the Tabi are footwear that you need when you fight.

They are optional and not necessary indoors.

You need a Bokkuto to learn using the basic sword. You may later require an Odachi which is a long sword and a Kodachi which is a short sword as you grow more proficient.

Kenjutsu is an ancient martial art form, and it is a privilege the ancient fighting sport that was once only taught to Samurais.

Is Kenjutsu Good For Self-Defence?

I am sure there are elements of Kenjutsu that would be useful for self defence. However, they are probably hidden deep into the art, and as such, there are far easier and more accessible ways to learn to protect yourself.

If you are choosing to train in Kenjutsu, it is probably because it presents a good past time and of course it is pretty cool.

So there you have it, our complete guide to Kenjutsu.

Without a doubt, the are of Kenjutsu is special and packed full of colourful history.

But it is an art that forms part of history and makes for a challenging and beautiful Martial Art to learn.