This is the first in a series of articles looking at learning in Martial Arts.   Over the series we will look at how we learn a martial art (or any physical skill) and some of the most common theories involved.    I hope to inspire you as a student to read further and gain a better understanding of how you learn; this should lead to improvements in your martial art or at the very least alleviate some of the frustration when things just don’t seem to be working that well.

This first article looks at the journey to unconscious competence, which is often seen as a one way journey.   However, like most things in life, there is more to it and the journey becomes circular.

What Mr Lee is alluding to is someone who has practised and practised a single technique, until they can apply it without any thought.   In other words they have become “unconsciously competent” at the technique as opposed to someone who has tried doing many different kicks but has not put in the time to perfect them. So how do we get to this stage of unconscious competence?   The diagram below shows the model of the journey. 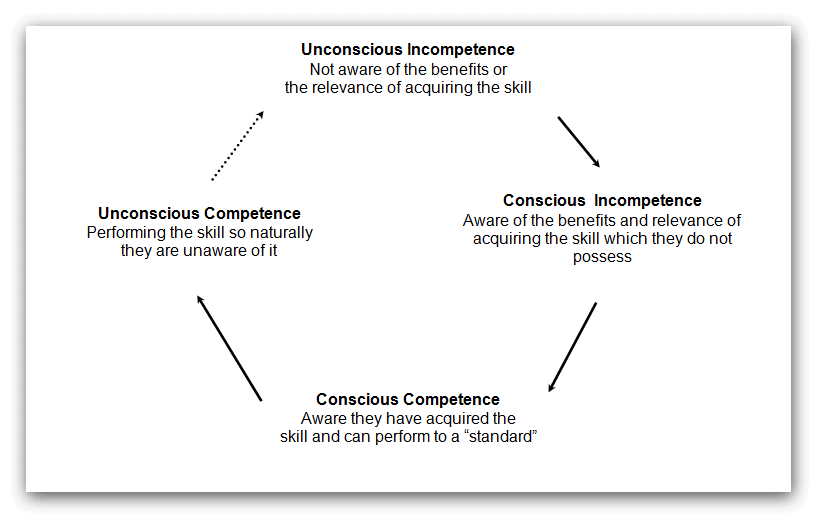 This is the first stage of the journey and it is often thought that this stage is about complete lack of awareness of the subject.   It is assumed by many that a potential student walking through the door has already reached the second stage, Conscious Incompetence.   Not quite.

The student is highly likely to be in the stage of unconscious competence for several reasons.

They will not know what the martial art is really about, but they will have made assumptions.   As a martial arts practitioner you will know many martial arts are different and have different benefits.   How many times have you heard people say to you that “you do Judo don’t you?” when the reality is that you may have been practicing Karate for the past 20 years or more.   Or “you have black belt in Tae Kwon Do” when really you are black sash in Wing Chun.

To the lay person Judo, Karate, Tae Kwon Do, Kung Fu are all the same thing, so  you can see how when someone enters the training venue that they are still very much in the stage of unconscious incompetence.

The person needs to become aware of what is on offer and where their incompetences lie before they can start to develop any new skills.   These will be the skills specific to the martial art on offer.   The teacher should be able to demonstrate the skills and highlight the benefits to the student.

This is the stage where a person recognises the reality of what it is they are trying to learn.   It may be that it is not what they originally thought and walk away and try something else.   Many of you will have been on a course and will have had expectations of what was on offer only to find out it was not what you expected.   Sometimes it is a pleasant surprise and you stay, other times you may just walk away and look elsewhere.

Techniques are shown which the new student will copy to their best ability and often there will be difficulty in the early stages.   Soon they will start to progress quickly as there is great room for improvement.   This will be the stage when the person rises to the challenge and believes that with practice they will improve.

This is the stage that is pretty much what it says on the tin.   As a martial artist the moves can be completed with a significant degree of competence.   The moves will be understood and can be performed using the conscious level of the brain without assistance.

This is the stage that the real work begins.   The move will need to be practiced repeatedly until it is finally grooved into the unconscious and becomes second nature.  This is often a difficult stage as there is less to learn about a technique and any improvement appears to be slow.

It is a common stage where a learner will want to move on.   They can do the move, albeit with thought, and may think, “what more is there to learn about this move?”   The catch?   It won’t work under pressure and often this will be interpreted as “the technique is no good” and it is thrown aside in a bid to find a better technique.    (As an aside I do understand that some techniques have been proven not to work, but that is another argument and not for this article.)

You made it this far!  Now you are at the stage of being able to perform a technique at will with no conscious effort – it just happens!   How many times did you have to practice the move?    Some will argue at least 3000 times; however, there is some debate on this and for the sake of time we will just say lots and lots of practice and buckets of sweat!

Many believe that there is a further stage.   The “Magic” zone!   The skill is mastered to such a degree that it has become totally effortless and easy.   You may have seen such masters and are in awe of their ability!

Great, you say, I have reached the end and I can perform the technique well and so I do not need to practice it anymore.    Not quite true.   If you have ever been laid up in hospital you will know what I mean.   Most of us have been walking for years and we are good at it (Unconscious Competence) but what happens when you have not walked for a couple of weeks or more?   Yes, you have to relearn to walk.   It won’t take you long but you still have to go through a frustrating process.   So what happens if you do not practice a technique regularly?   Just like an unused blade, it will become rusty.

There is also another element that needs to be considered that is particularly pertinent to those that teach.   How many time have you met an amazing martial artist that just cannot teach?   There is no denying their skill and their ability to perform a technique at will, but it is so natural and so ingrained into their unconscious competence that they may have lost the ability to understand (on a conscious level) how the precise technique is performed and more importantly how to explain to those wanting to learn it.

When teaching there is a need to go back to the previous levels to be able to coach or teach those wanting to learn and so the journey will begin once again.   And yes, that is exactly what I have had to do to write this article. Even though I have been teaching Wing Chun since 1997 and I am  a professional trainer in other non-martial arts arenas,   I still needed to remove myself from unconscious competence and revisit all the stages to write this article.

Once more, Bruce Lee puts it so well:

Wayne Bradbury has studied various martial arts since 1978 and has been teaching Wing Chun Kung Fu with the Kamon Martial Art Federation since 1997.   He is also a freelance trainer, teaching management skills to public and private sector organisations.